Canadian economist Martin Murenbeeld, well known by the gold investment community as one of the best and most accurate gold price forecasters, has come up with revised figures for likely gold prices in 2018 and 2019 after taking the reasons behind the recent gold price downturn into account.

The Murenbeeld approach is to come up with best, worst and median price scenarios for the gold price, attach probability percentages to these and then come up with a weighted prediction for the 2018 average price, the 2018 year end price and a 2019 average.  To these figures he has added what he describes as a Trump factor to take into account possible short term effects of the U.S. President’s sometimes conflicting statements on economic policy and what he would like to see happen..

The Trump effect can be seen in the price reaction to his tweets on Friday that the Chinese and Europeans are driving their currencies downward, thus strengthening the dollar and making America less competitive as a result.  He does not seem to recognise that some of these parity changes are due to the perceived effects of his proposed tariff impositions on the economies of affected groups or states.  Action and reaction. 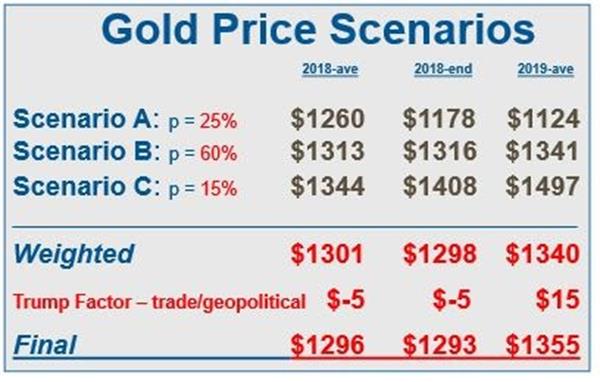 NOTE 2: The Murenbeeld forecast always comes in three scenarios, with Scenario B being what is seen as the most likely (higher probability) scenario. In Scenario A the dollar continues to rise quite substantially, whereas in Scenario C the US Administration begins to actively devalue the dollar. Scenario B has the dollar drifting modestly lower against the yen, euro, and renminbi as the Trump Administration recognizes that tariffs are really only short-term tools that cannot address fundamental imbalances without creating serious economic/political collateral damage. (The Trump factor is negative for the rest of this year as the trade war subtracts from gold’s safe haven status.)

All this, accompanied with a myriad of supporting charts and comments, is set out in Murenbeeld &Co.’s latest Gold Monitor weekly subscription newsletter.  For subscription details click on www.murenbeeld.com for details of services provided and a 2-month free trial offer. (As background, Dr Murenbeeld’s original company was purchased by DundeeWealth Inc. in July 2004 and Dr. Murenbeeld was appointed Chief Economist of DundeeWealth Economics. DundeeWealth (and Dynamic Mutual Funds) was purchased by ScotiaBank in 2011. Dr. Murenbeeld stayed on as Chief Economist until he returned to Dundee Corp in 2013. Dr. Murenbeeld left Dundee Corp in November 2016, and is now president of Murenbeeld & Co, specialising in gold research and publisher of the Gold Monitor and Economic Monitor newsletters).

As background to the research and his gold price projections Dr. Murenbeeld now feels that President Trump’s actual and proposed tariff impositions on some U.S. imports are dollar supportive and with the gold price tending to react inversely to dollar parities it has so far proved to be very negatively affected – hence the sharp recent downturn (in U.S. dollar terms at least.)  However the reaction to President Trump’s latest statements on the strength of the dollar which helped gold close the week back above $1,230 could have a further knock-on effect next week.

We see the Trump trade tariffs as potentially inflationary and they could ultimately prove to be dollar negative, possibly equity negative too and could lead to Fed caution on interest rate rises in the second half of the year (See: 2018 gold price predictions – where are we now?)  All this could give gold a sufficient boost late on to end nearer to the Murenbeeld optimistic scenario at around $1,400 although this does seem over-optimistic for the gold investor given the yellow metal’s and the dollar’s recent performance.  But only about three months ago a $1,400 year end likelihood was looking conservative and the year end is still over five months away.  A lot could happen in this period of time – either way.

As we have often stated previously, though, we see the precious metal’s long term future as distinctly positive.  Peak gold is probably already with us so supply is likely to diminish over time while general economic growth in those countries which have a history of being pro-gold as a wealth store and economic safety provider should lead to ever increasing demand.  Even in the West, which doesn’t necessarily have the same inbuilt feeling for gold, equity markets are looking vulnerable to a major correction, which could also drive investors back into the wealth preservation safe haven aspects of gold.  The only question, in our opinion, is one of timing, but it could all happen sooner rather than later.