Martin Murenbeeld, and his colleague Chantelle Schieven, have just published their latest gold price forecast which now takes into account what Murenbeeld & Co. considers the likely impact of the Covid-19 virus incidence on the global economy and precious metals.  As usual, the group comes up with three likely scenarios and applies what it considers a probability index to each scenario and uses these to come up with a weighted average prediction of the likely path of the quarterly gold price average over the next two years. And then the group adds in an additional increase based on what they consider a necessary adjustment for possible geopolitical events having an impact on their overall price forecasts.  Martin Murenbeeld and his team have been considtent in their cautiously optimistic forecasts of the gold price which have tended to be more realistic than many other gold commentators.  Their latest table taking all this into consideration is set out below: 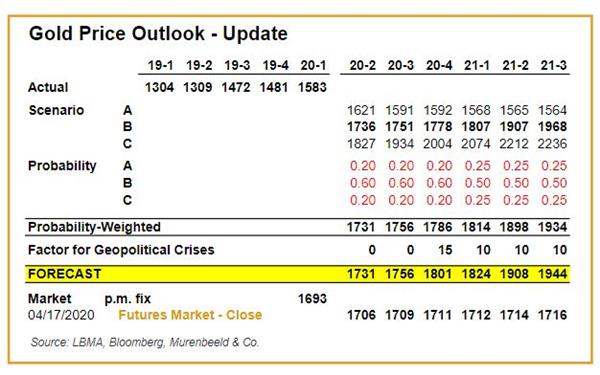 The basis behind the three scenarios is as follows – as set out in the latest Gold Monitor newsletter:

“Scenario A is a bearish gold price outlook, Scenario B is the group’s baseline price outlook, and Scenario C is a bullish gold price outlook.  According to the company, the assumptions that drive each scenario are quite varied; in Scenario A the US dollar continues to rise from current levels, for example, and inflation-adjusted interest rates rise. While liquidity expands quickly in this scenario, it levels out relatively soon. The opposite is assumed for Scenario C; the dollar succumbs to negative pressure from the rise in the US monetary base, and global liquidity expands rapidly for the next 4-6 quarters.”  Scenario B falls somewhere between the two.

The overall prediction therefore is that the gold price will average $1,731 in the current quarter, $1,756 in Q3 and $1,786 in Q4 and then continue to rise slowly and steadily in 2021.  Our own view, as expressed in an article published yesterday – See: Gold drops below $1,700, equities rise but don't expect this to persist, tends towards the more bullish Murenbeeld scenario – indeed parallels it remarkably closely with our anticipation that the gold price will reach $1,800 in June or July and $2,000 by the year end.  We would also expect the price to continue rising in 2021 as we anticipate the downwards effects of the virus on the global economy and on general equities markets to continue for some time to come.

We also suspect lifestyles will see some drastic changes if, and when, things ever get back to anywhere near normal.  These changes are unlikely to be beneficial for future uninterrupted growth in equities markets until memories of the virus impact are expunged from the collective mindset – which may not be for some years.

Some sectors of industry may take years to recover, if they ever do – think cruise lines, business travel/airlines, the restaurant and hospitality sector and auto sales and manufacture, although others may see continuing growth even after the lockdowns end.  The general manufacturing sector will probably take time to get back to any semblance of normality too – and there is always the possibility of a second virus wave bringing things back to a halt again if things move too fast.

The perhaps positive long term benefits could be that the current reliance on China for huge parts (100% in some cases) of the medical and tech sectors may be gradually phased out in favour of domestic manufacture, given there is something of an anti-China backlash developing, but this will take time.  It will also mean that some elements of consumer purchasing will become more expensive – yet another inflationary pressure on the global economy.

Meanwhile, globally, the Murenbeeld weekly Gold Monitor notes that the IMF is forecasting that advanced economies will see a 6.1% GDP contraction this year, and the world economy a 3.0% contraction.  Like many such recent expert forecasts, we feel. Though,  that this paints an over-optimistic picture of the overall effects on the global economy, and the final figures could prove to be far worse.

Murenbeeld reckons that there are both plusses and minuses for gold in this general outlook.  He describes the pluses as the world’s developed economies promise to do whatever it takes to mitigate the effects of the coronavirus-related downturns.  He anticipates that these fiscal moves will dominate the gold market going forward. But, conversely, the  global recession/depression, even if relatively short, will have an impact on non-investment demand for gold. India and China, in particular, make up more than 50% of global consumer demand, and both economies are hurting. Jewellery demand will also be damaged in developed markets. Nonetheless, current demand for ETF gold and gold coins is surging as we have pointed out in previous articles. We suspect that this form of safe haven investment demand will outweigh the likely downturn in jewellery and artefact business.  Normal supply/demand fundamentals may thus be relatively irrelevant while the virus effect plays out.

Overall, therefore, the near term outlook for general economic growth looks to be horrendous, but (for gold) the outlook for more debt, more liquidity, and potentially an increase in the likelihood of inflationary pressures growing, looks positive for the price – at least in dollar terms.  We also see the longer-term negative economic outlook as keeping the equities extremely vulnerable for the foreseeable future.  Asian equities fell this morning and European ones opened lower.  However the gold price remaines comfortably below $1,700 remaing in the $1,680s.  All eyes will be on Wall Street, and we anticipate a reaction to the above-expectation, and in our view over-optimistic, rises seen on on Friday.