Readers of my writings will know I rate Martin Murenbeeld’s analyses  of the gold price, and his predictions of where it is headed, very highly.  He is what could be termed cautiously bullish – which in my terms means realistic – in his weighted projections so one should take his latest figures very seriously.  We perhaps consider his latest projections perhaps slightly over-conservative, but maybe all the better for that given the excess of hyperbole which dominates many of the projections from the plethora of ultra-bullish analysts out there.

Murenbeeld’s latest projections are set out in the table below from his latest Gold Monitor newsletter: 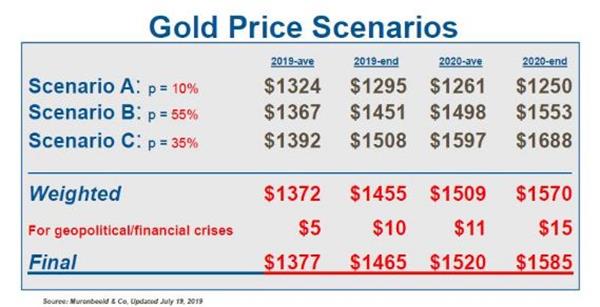 At first glance the projected weighted average for 2019 at $1,377 may look a little conservative given a current spot price in the $1,420s but it should be remembered that gold spent much of the period from March through May at below $1,300, and even should gold remain comfortably above $1,400 for the remainder of the year – and Murenbeeld is predicting a year-end price of $1,465 – the average price of a little below $1,380 for the full year is certainly not unreasonable unless the gold price really takes off in the second half of the year.  Indeed Murenbeeld himself reckons that gold could breach $1,500 at some time during the current year in his bullish scenario to which ascribes a 35% probability.

As can be seen from the table Murenbeeld follows his normal pattern of predicting bearish, most likely and Bullish scenarios for the gold price and ascribes a probability for each scenario from which he calculates a weighted gold price projection.  The he adds a further premium to take account of a prospective geopolitical crisis occurring which would likely have a positive effect on the overall metal price.  He adjusts his figures from time to time (usually quarterly) in line with interim gold price trends as he sees them.

For Murenbeeld his latest figures are decidedly bullish in recognition that he sees far more positive elements likely to affect the gold price this year and ahead than negative ones.  He lists five key potentially bullish factors as being an overvalued U.S. dollar; the ever-increasing global debt burden;  potential geopolitical crises and flashpoints around the world; continuing central bank gold accumulations; and the likelihood of global gold production starting to diminish.  There is also the likelihood of the U.S. Fed lowering interest rates by 25 basis points at its meeting at the end of this month – and a possibility, probably less likely, of it reducing rates by 50 basis points, although if it were to do so that would likely drive the gold price up over $1,450.

He sees the bullish factors substantially outweighing the bearish ones , many of which seem to be falling away – these being:  the likelihood of the Fed, or other central banks raising interest rates; further appreciation of the U.S. dollar (seen as unlikely if the Fed is easing); subdued inflation outlook (although this could also be seen as gold positive); competition for asset growth from other asset classes like equities .

As an addendum, as we mentioned above, Murenbeeld reckons gold is likely to breach the $1,500 level in H2, although probably not for an extended period.  He also sees gold taking out its record high in the years ahead, but perhaps not for some time.  Most importantly he sees the ever increasing global debt problem as unlikely to be solved in any way over the next five years as having a positive impact on gold going forwards regardless of any short term negative factors.