As readers of my articles will well know, I have always rated the commentary and forecasts from Canadian consultancy Murenbeeld & Co most highly, so a new forward gold forecast from the consultancy has to be worth passing on to our readers.  Economist Martin Murenbeeld, who gives his name to the consultancy, has consistently been one of the most accurate gold price forecasters out there, although admittedly tends for the most part to err on the side of caution in his predictions,  This has been a wise policy given gold’s performance of late.  However, in my opinion, his latest forecasts are perhaps too conservative, but are worth noting regardless.

Murenbeeld arrives at his overall price forecasts by generating three price scenarios – a bearish one, one he sees as most likely, and a bullish one.  He attaches a probability level to each of these forecasts and by so doing comes up with his overall gold price forecast.  He sometimes adds in a figure for the effects of geopolitical crises on the likely gold price level, but as can be seen from the table below setting out his latest forecast he has left this out on this occasion.  This is not necessarily because he sees no such crises ahead, but anything of this nature is currently impossible to quantify, either in timing or in likely magnitude for the gold price. 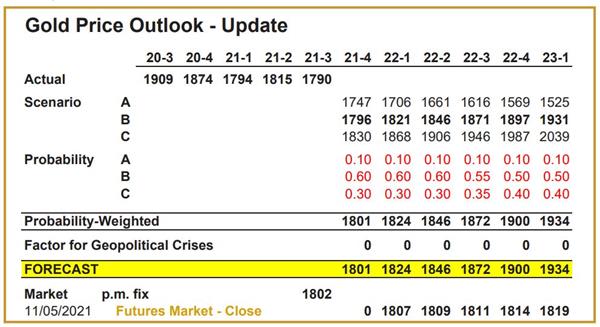 In reviewing these figures, the reader should bear in mind that the gold price averaged only $1,777 in October, meaning that gold must average well above $1,800 during November and December to achieve an $1,800 price average for the full Q4.  After Friday’s price movements, if this $1,800 breach can be sustained, the higher quarterly average looks to be possible - or even likely.

Murenbeeld, however, does express a degree of nervousness on gold’s likely short term performance after last week’s price activity.  If gold performs as we think it might over the next few weeks, however, Murenbeeld’s bullish  Scenario C could quickly become the high probability scenario.

As it stands, the two key assumptions underlying the scenarios are that the dollar weakens ever so modestly in Scenario B, and the 10-year US Treasury Inflation Protected Securities (TIPS} yield, which Murenbeeld has also reckons to bear a close correlation to gold’s price performance, remains broadly flat, around -1.00%.

What is notable from the latest Murenbeeld forecasts is a slight upwards movement over the second half of 2022, and in Q1 2023, in the weightings for the most bullish Scenario C.  Indeed his Q4 2022 and Q1 2023 predictions have only a 10% probability gap for this Scenario over the (most likely) Scenario B forecast, suggesting perhaps a more bullish outlook for gold in the medium to long  term.

We, in our own forecasting, are perhaps even more bullish on gold’s likely price path than is suggested by the Murenbeeld Scenario C, although our predictions are based more on gut feel than Murenbeeld’s more calculated approach.  We feel gold may well breach the $2,000 level earlier in 2022, although whether it does this sufficiently so to raise its quarterly average above $2,000 earlier than the Murenbeeld Scenario C predictions has to remain uncertain.