Just before Christmas I published an article titled ‘Very bullish' on gold – Murenbeeld noting that the gold analyst and forecaster I probably rate most highly, Martin Murenbeeld,  had stated that he was very positive on the gold price for 2020 but without putting a specific price on his prediction.  Now Martin is one of the most conservative of gold analysts – not for him the $5,000 or $10,000 or higher gold forecasts - but so saying his team’s relatively sober gold forecasts over the years have been some of the most accurate out there.  Thus the statement that he is ‘very bullish’ on gold should be taken very seriously. Although what he means by ‘very bullish’ may well disappoint the out and out gold bugs who are probably looking for much higher levels.

What Martin and his team of Vancouver Island based economists and analysts do every year is to predict three likely gold price scenarios for the year – Scenario A is a bearish gold price outlook, Scenario B is the baseline price outlook, and Scenario C is a bullish gold price outlook. The assumptions that drive each scenario are quite varied; in Scenario A the US dollar continues to rise from current levels, for example, and inflation-adjusted interest rates rise. The opposite is assumed for Scenario C. Central bank gold demand is also contrasted across the scenarios, etc.

Once these three scenarios have been established the analysts give a likely weighting level to each and establish an average for the year ahead, a likely year-end price and then do the same for the following year.  At this point they add in an allowance for unknown geopolitical or financial crises that may affect the price and come up with predicted figures – see below. 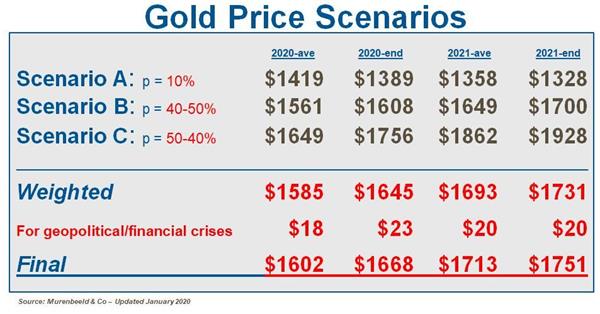 Unusually this year’s predictions give as high a weighting to the bullish scenario as to the baseline one – so overall they see an average gold price over the year as a little over $1,600 and a year-end price of $1,668.  For 2021 they see the gold price continuing upwards with a year-end level of $1,751.

Murenbeeld and his team will adjust these forecasts in the light of events and gold price movement during the year ahead, but in their terms these initial forecasts are indeed extremely bullish!

Geopolitical uncertainties are somewhat enhanced by the unpredictability, and short termism of President Trump in the U.S. who seems to be taking an overly aggressive - or a perhaps less diplomatic one than his predecessors – to global events.  This has taken the form of economic and military drum-beating over events and policies he does not agree with.

Some of the geo-economic factors singled out by Murenbeeld as likely to have an impact on the gold price going forward are as follows:

To these we would also point out that the Phase 1 ‘trade deal’ with China was effectively a non-event despite the ‘breakthrough’ spin put on it by both sides.  The serious issues dividing the two superpowers are just as contentious and divisive as they ever were.  We should point out that China is in a transition stage in its domestic economic development and can probably afford to take a more long term view and hold off on any possible significant trade concessions.

We are not sure either that mine gold supply is yet contracting with major producers like Russia and Australia still expanding production levels.  However global supply is at least plateauing or growing extremely slowly.  Peak gold is just about with us, but whether global gold mine supply is actually diminishing yet remains to be seen.

Geopolitically we are living in a somewhat uncertain world.  President Trump seems to have a ‘shoot from the hip’ approach to global diplomacy and while this may endear him to his domestic supporters it does little for global stability.  Murenbeeld points to the following as support for his geopolitical event premia although points out that although specific events – like the assassination of General Qasem Soleimani – may have a big short term impact on the gold price, longer term the effects tend to be more muted:

• … and made available to other unfriendly states

world with an untold number of potential crises points.

No balanced assessment of the gold price situation would be valid without a look at some of the bearish scenarios facing gold.  Murenbeeld lists these too, but points out that his team cannot see as many of these as in the past – hence the low weighting of his Scenario A and his overall bullish assessment.  He sees the following as the principal downside risks facing the gold market in the current year:

Last, but perhaps not least is that 2020 is a U.S. Presidential election year and whether President Trump is re-elected, or whether a Democrat becomes President colud see something of a sea-change for the U.S. economy and for gold.  Murenbeeld puts these uncertainties as follows:

The November election will come down to a few “toss-up” states. that went to Trump: Arizona, Wisconsin, Pennsylvania, North Carolina, Florida

• The dollar will likely roll over more dramatically

• Global tensions will likely subside for a period of time

Thus we may see some volatility in gold pricing revolving around the ebbs and flows of the Presidential campaign.  It should not be forgotten though that the polls mostly suggested a Hillary Clinton victory in 2016 yet the final outcome was a little different.  Arguably the Democrats may not have such a strong contender as Clinton this year unless she stands again (but she could be seen as damaged goods!) and Trump, and his supporters, would probably relish taking her on again.  It just adds another degree of uncertainty into the potential gold price mix!