We’ve been seeing some anomalous figures in Swiss gold imports and exports of late and the recently released November figures are no exception.  After several months of gold imports exceeding exports quite substantially, in the latest month’s figures the revers is true with gold exports exceeding imports by almost 46 tonnes.  While this serves to partially redress the annual balance it appears to have been a revival in exports to Hong Kong and India - the two leading recipients of Swiss gold that month - which has been key to a rise in exports from the previous couple of months’ figures to the third highest monthly total this year.  For the latest country-by-country chart of Swiss gold exports see graphic below: 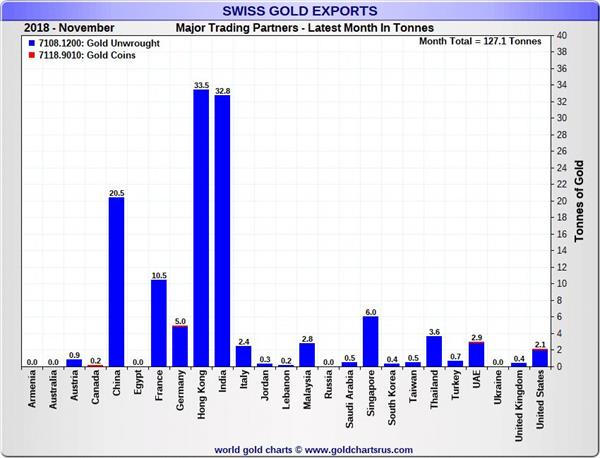 For the first time for a number of months Hong Kong took pride of place as the leading importer of Swiss gold with India a close second.  Both eclipsed direct exports to mainland China which has been the leading importer of Swiss gold for most of the past two years.  However combined exports to Asia and the Middle East still accounted for 82% of all Swiss gold exports in November continuing to emphasise the continuing flow from the West and the world’s major gold producers to what are seem to be firmer hands in the East.  Interestingly Europe accounted for much of the balance of Swiss gold exports that month absorbing 15%.

One suspects, perhaps, that there’s something of a timing anomaly between the Hong Kong and mainland China figures with the former’s fabricators and traders building up stocks of gold slightly earlier ahead of the Chinese New Year than their mainland counterparts.  In any case the bulk of the Hong Kong imports will find their way to the mainland anyway. (This year the Chinese New Year falls on February 5th).  But the figures could also suggest a falling off of Chinese demand in line with what is being generally seen as a declining economy, perhaps being hit by the U.S. imposed trade tariff increases, although there’s little sign of this in the balance of trade between the two global economic superpowers as yet which remains heavily in China’s favour.

Perhaps the most visible sign of a Chinese economic downturn has been the profit warning from Apple suggesting a huge downturn in sales of its latest products in China - but this could also be because of an adverse reaction to the purchasing of U.S. products in China because of the ‘trade war’ combined with the cost of the Apple products and the huge advances being made in Chinese cellphone and computer technology and capabilities at far lower prices.  Adverse publicity from the arrest of Huawei’s Chief Financial Officer while changing flights in Vancouver, Canada in response to a U.S. request, will not have helped the perception regarding U.S. products either!

One wonders how long the U.S.-China trade war will continue given that it so far has been damaging to both sides.  In general no side ever gains from a trade war of this type.

For the record a graphic of Swiss gold imports in November is shown below: 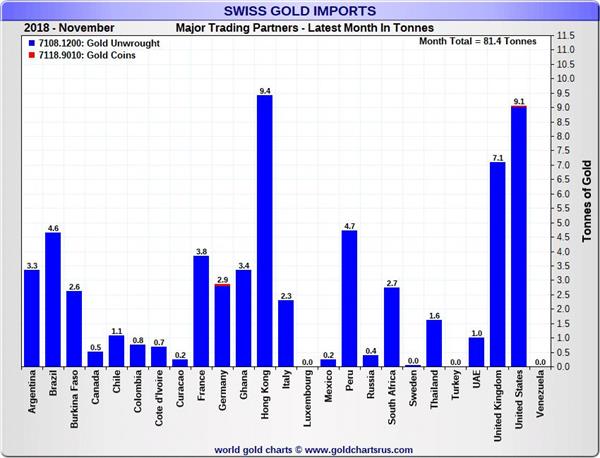 As can be seen the majority of the gold imports are from gold producing nations plus the UK which is something of a centre for gold accumulation, but the anomalies here are Hong Kong, the UAE and perhaps France and Germany.  These may all be as a result of profit taking with the gold price coming off its lows hit in early November - but none of the anomalous numbers are that significant - particularly as Hong Kong, the biggest source of Swiss imports, was still a major net importer of gold.