At this time of the month I always look out for Nick Laird’s excellent bar chart of Swiss gold exports from www.goldchartsrus.com, as this gives us an excellent idea of where gold is flowing.  To recap on previous articles on this subject, Swizerland is home to four of the world’s largest independent gold refineries – Heraeus, Metalor, PAMP and Valcambi – and all these in specialise re-refining gold scrap and London good delivery gold bars to the kinds of small sizes most in demand by their global customers – principally in Asia and the Middle East.  Altogether around 2,000 tonnes of gold a year passes through these refineries, which compares with global production of new mined gold of around 3,200 tonnes (of which China produces something over 450 tonnes which does not go into Switzerland).  So altogether the Swiss refineries’ business accounts for re-refining and exporting an amount of gold equivalent to around 70% of the total volume of available global new mined gold.  That is why Swiss gold export levels attract my attention in this way.

The latest chart for the month of January, which uses official Swiss export figures, shows that gold exports from Switzerland fell heavily to a little over 120 tonnes in comparison with an exceptionally high December 2016 figure when they totalled a massive 287 tonnes (See: China 154, Hong Kong 39. Swiss Dec gold exports show remarkable gold flows), but this is not too surprising as December exports to mainland China alone came to 154 tonnes due to pent up demand ahead of the Chinese New Year holiday.  This demand level will have fallen back sharply in the first month of 2017 – as can be seen from the latest figures, with the Lunar New Year falling early this year in late January.

One other factor of note from the Swiss Statistics is that India was the top destination for Swiss gold exports in January and that there was also particularly strong demand from two other Asian nations where there are strong gold buying traditions – Thailand and Singapore.  These have both been strong recipients of Swiss gold in the past as well, but usually dwarfed by Hong Kong, Chinese and Indian imports. 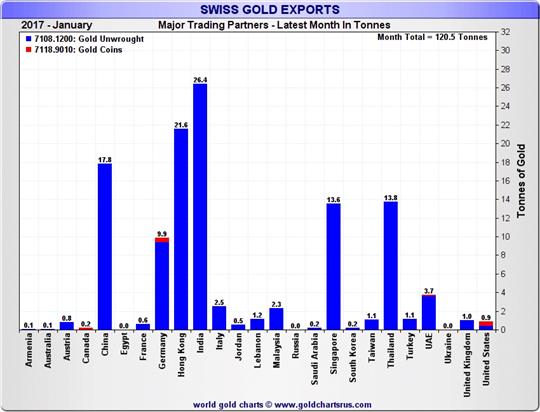 Another factor shown up by Swiss gold exports which we have been at pains to point out in the past, but is still ignored by much of the mainstream media, and by some supposed gold analysts who should know better, is that Hong Kong gold exports to the mainlandare no longer a proxy for total Chinese gold imports – nor have they been for the past three years or more.  This is not to say that the Special Administrative Region is not an important conduit for gold flowing into China, but it currently probably only accounts for perhaps 60% at most so headlines proclaiming Chinese gold imports are falling purely based on Hong Kong statistics are no longer credible.  The December Swiss gold export figures showing 154 tonnes of gold exported direct to mainland China, with only 39 tonnes into Hong Kong, despite being somewhat anomalous, really proved this point.  Proportional exports in January may well be more normal with around 55% of total Hong Kong plus mainland China flows into Hong Kong and 45% into the mainland directly.

As we pointed out in a previous article on Chinese gold consumption (See: Chinese gold consumption: Far higher than most analysts and media tell us) , China watcher, Koos Jansen of www.bullionstar.com, who follows the Chinese gold figures closer than anyone, commented that “Most likely Hong Kong’s position as the largest gold exporter to China will slowly fade in the coming years, as the State Council is stimulating gold freight to go directly to Chinese cities (hoping the Shanghai International Gold Exchange will eventually overtake Hong Kong’s role as the primary gold hub in the region). Consequently, gold exports to China are increasingly bypassing Hong Kong.”