Fed chair, Jerome Powell, delivered his take on what transpired at the latest U.S. Fed FOMC meeting yesterday and the gold and silver prices fell back – as seems to be the norm after Powell speaks, regardless of the content.  There thus has to be a suspicion that those who would like to see gold and silver lower are poised with their fingers on the ‘sell’ button immediately a Fed statement is forthcoming, no matter what it actually says.

Gold had been quite volatile ahead of Powell’s statement.  After moving higher in European trade it was brought down sharply when U.S. markets opened before recovering strongly – perhaps in anticipation of what Powell seemed likely to report.  In the event the policy suggested at the FOMC meeting was predicted pretty accurately by most observers in that the Fed would be concentrating on rebuilding employment levels – perhaps easier said than done given the virus pandemic effects on big sections of the economy – and keep interest rates near zero until at least 2023.  It also suggested that QE would continue for the foreseeable future in an attempt to bring the U.S. economy back to ‘normal’.

While the Fed’s position had largely been accurately forecast, and the maintenance of low rates and the continuation of QE should, in our opinion, be positive for precious metals, and for gold and silver in particular, prices fell back sharply in the aftermath of the Powell press conference.  While we suspect there will now be something of a recovery, gold and silver will again have to rebuild some of their lost ground.

The FOMC meeting, and the subsequent press conference, were notable in that the latest Fed ‘dot plot’ was released in full.  The dot plot shows the predictions of the voting FOMC participants’ views on where interest rates should be over a five year period – see image below:

The Fed Dot Plot as of September 2020 FOMC meeting 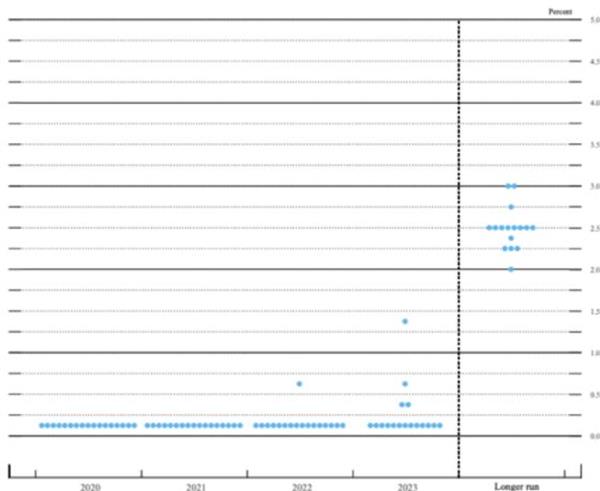 As can be seen all the FOMC participants agree there should be no interest rate rises until at least 2022 and only one participant thought a 2022 rise would be apposite.  Four were looking for an interest rate rise in 2023. Although the vast majority were still of the opinion that rates should stay close to zero that year too.  It is only in 2024 that the majority of participants saw that any significant interest rate rise might be necessary – and probably only then if the Fed’s inflation rate target of 2% were to be breached significantly.

What all this suggests is that the likely adverse effects of the virus pandemic will continue to impact the U.S. economy for at least the next three full years.  Unemployment levels may well get worse before they begin to improve, however much the statistics may be massaged by whatever Administration is in power next year after the November Presidential election.  The virus is still impacting the U.S. pretty drastically with around 40,000 new infections and more than 1,000 deaths being reported each day.  Despite the U.S. President being in denial, the U.S. death rate per thousand of population is among the world’s highest and rising daily. True much of the rest of the world may not be reporting their death rates as accurateky as the U,S, but even in comparison with European death rate figures those in the U.S. are higher than in virus hotspots like Italy and France, will likely overtake that of the U.K by the end of the current week and even Spain within the next few weeks.

We have continually suggested, and largely been proved wrong so far, that U.S. equities will crash and burn and gold will continue to rise as a result, dragging silver up with it.  After all U.S. equity growth seems illogical given the likely hits on most corporate earnings levels due to the unprecedented downturn in the U.S. economy as a result of the COVID-19 virus pandemic.  We thus suspect our dire predictions for the equity markets will still come about – only the timing is uncertain!

The Fed and the U.S. Administration have been pouring huge sums of money into the U.S. economy to try and alleviate the virus effects, but at sometime this largesse will come to an end and how this is handled will likely set the course of equities and precious metals prices for the future.

To recap on yesterday’s precious metals price action, gold and silver prices both rose ahead of Powell’s statement.  Given that most predictions of what he would say were accurate, the price falls following the statement late in the day, and this morning in Europe, could be seen as illogical – suspicious even!  Hidden agendas are almost certainly in play.  Once the markets have had time to digest the Fed’s position we suspect gold and silver price growth will likely resume.

There will not be another FOMC meeting until immediately after the forthcoming U.S. Presidential election, which will not really give the FOMC participants time to judge the ramifications of either four more years of the Trump Presidency, or of Biden-led Democratic party policies, so the next FOMC meeting will probably be seen as irrelevant, so we will have to wait for mid-December before we can judge whether the Fed will come up with any changes from its current programme. Until then we expect markets to be largely driven by the perceived, and actual, results of the U.S. election.  Precious metals tend to thrive on uncertainty and prices will likely ebb and flow accordingly, but in an overall positive manner.  The next couple of months could prove interesting!