On a day with gold trading around $1,310 and stock markets almost universally in the red, the World Gold Council (WGC) has issued its latest Gold Demand Trends quarterly report and it doesn’t make for great reading for gold investors.  According to the WGC’s latest figures Q1 gold demand was the lowest for 10 years, primarily due to a fall in gold investment demand led by China, Germany and the USA – usually the principal investment demand centres.  Altogether the WGC reckons that global bar and coin demand fell by 15% quarter on quarter and ETF inflows were softer too, although still positive at 32.4 tonnes.

God followers in the USA certainly won’t be too surprised at these figures given the extremely weak reported gold coin sales from the U.S. Mint – see chart from www.goldchartsrus.com below: 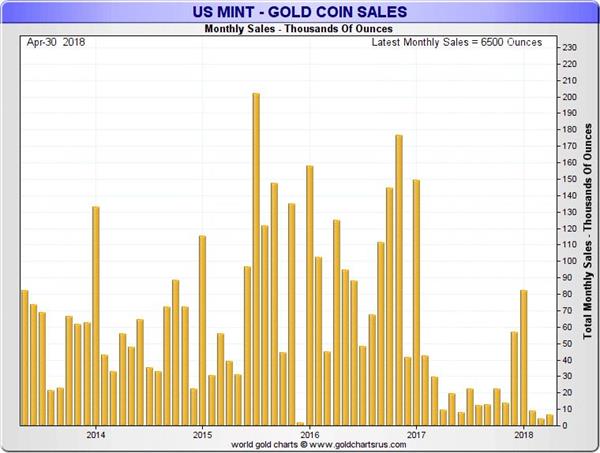 Compared with say 2015 and 2016 U.S. Mint coin sales have been pretty subdued for two years now and they won’t have been helped by the lacklustre performance of the gold price over the past month or so.  Gold has remained range-bound mostly in the low $1,300s largely due to a sharp pick up in dollar strength as represented by the dollar index, which has risen around 4.5% from its low point this year – and gold is down a somewhat similar percentage from its high point of around $1,365 at the time of writing.  The gold price is generally inversely related to U.S. dollar strength and this suggests the correlation is holding up well.  The dollar appears to have turned down a little today and if this is the start of another downwards leg then the gold price could benefit accordingly.

The WGC report is not wholly negative for gold.  It does suggest that jewellery demand is holding up reasonably well with strength in China and the U.S. counterbalancing a decline in Indian jewellery demand, while industrial demand for the precious metal in the tech sector has seen six consecutive quarters of growth.

So where does that leave us now?  Equities are still looking nervous with falls almost across the board so far today, bitcoin appears to be picking up a little with BTC back over $9,000 and Ethereum pushing up above 700, although we remain dubious about long term strength in crypto currencies.  One commentator – I forget who – described bitcoin as like Candy Crush vouchers, or in other words has parallels to computer gaming, and we wouldn’t disagree seeing the possibility of it crashing back to near zero as definitely a possibility – we shall see.

If equities continue their weakness – and even at its current depressed level gold has outperformed th Dow and the S&P 500 so far this year.  All are in negative territory so far this year but gold is only down around 0.75% whereas the DJIA is down over 4% since the beginning of the year and S&P 500 down over 3%. (By comparison bitcoin is down over 30% since the begiining of the year and over 50% from its heady peak.) In other words, year to date gold has done a better wealth protection job than U.S. equities and way better than bitcoin!