Russia, which, along with China,  has been reported to be orchestrating a financial alliance to supplant the U.S. dollar as the world’s leading reserve currency, thus reducing its dominance of global trade, obviously sees gold as an integral part of the process.  Its central bank is currently by far the largest known regular buyer of gold globally and has added a further 31.1 tonnes (1 million ounces) to its gold reserves in November according to an announcement made by the central bank yesterday – it releases monthly reserve data usually on the 20th of the month.  Indeed Russia has been building its gold reserves pretty consistently for the past 10 years as can be seen from the chart below from Nick Laird’s excellent goldchartsrus.com  website. 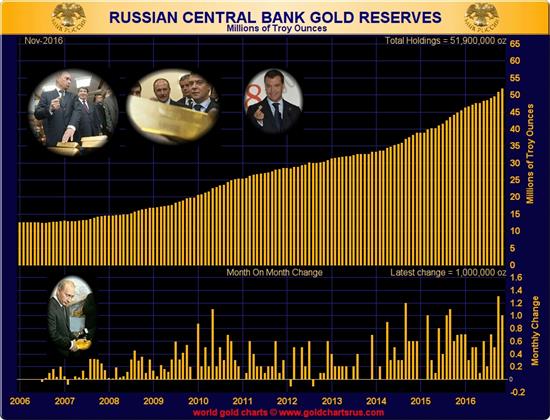 Russian central bank reserve figures will be subject to minor adjustment when reported to IMF, but overall they probably add up to just short of 1,600 tonnes – the world’s sixth largest national gold reserve, but still hugely short of the 8,133.5 tonnes as reported to the IMF by the USA.

Only recently Pravda reported that Russia would have to sell some of its gold to allay current account deficit problems – see: Russia may have to sell gold to boost current account but as we suggested at the time that doesn’t seem to have affected its central bank buying programme which has just seen the largest two month period of total purchases on record.  However, Russian mines produce over 20 tonnes of gold a month on average so there is scope for both gold buying and gold sales from the country’s own output alone.