It remains obvious that Russia under President Putin sees longer term benefits in building its gold reserves to which it is adding at a rate of around 200 tonnes a year.   The country’s central bank has just released is gold purchase figures for July and in the rounded off figures it reports these totalled 400,000 ounces – 12.44 tonnes – bringing the amount of gold purchased year to date to 113.3 tonnes, pretty much on track to meet the annual levels it has purchased for the past three years – around 173 tonnes in 2015, 206 tonnes in 2015, and 200 tonnes last year.  These figures account for a little over 70% of the country’s domestic new mined gold output over the period.  (Russia is the world’s third largest gold miner in terms of amount of gold produced – after China and Australia – but is one of the nations which appears to be growing its domestic gold production while the global total is reported as falling back a little).  It has a perhaps over-optimistic target of raising its gold output to around 400 tonnes a year from the current 270 tonnes by 2030 according to the Russian Union of Gold Producers (see Is there a pattern to Russia’s central bank gold purchases?).

With China still reporting month on month zero increases in its gold reserves to the IMF, as we have noted here before, at the current rate of increase Russia’s reported gold reserve figure may surpass that of China by early next year.  However, few believe that China is not, in reality, surreptitiously increasing the amount of gold held in its reserves.  It’s just that a section of them is probably being held in a non-reported account.  The country has a track record of doing this in the past – the anomaly has thus been its apparent monthly reporting of its increases in gold reserves from August 2015 to October 2016.  We believe it is no coincidence that it ceased reporting gold reserve rises once the yuan (renminbi) had been confirmed as an official constituent of the IMF’s Special Drawing Rights (SDR) basket of currencies which effectively gives the yuan reserve currency status.  While it is unlikely to replace the U.S. dollar as the world’s principal reserve currency in the short to medium term, it is already beginning to chip away at this through the implementation of some major trade deals in yuan, bypassing the dollar altogether.

Russia and China are also keen to set up an alternative to the effectively U.S.-controlled SWIFT (Society for Worldwide Interbank Financial Telecommunication) international payments transfer system.  The worry here is that the U.S. and its allies might effectively be able to cut Russia and/or China out of the global funds transfer system should it wish to do so.  It did this as a part of its sanctions imposition on Iran effectively cutting off Iranian banks from cross-border transactions with foreign banks for four years, up until sanctions were lifted last year and there were calls to do the same with Russia over Ukraine – but not implemented.  Russia says it already has a system in place to match SWIFT, as does China.

Russia has been adding significantly to its gold reserves now for around 10 years – see chart of cumulative additions from Nick Laird’s www.goldchartsrus.com website below: 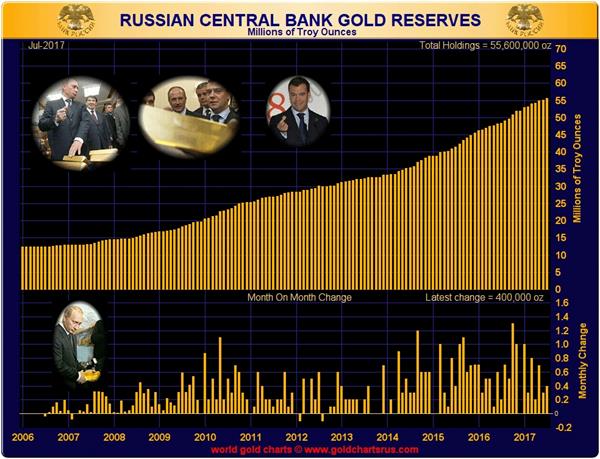 Its current reported holding of 55.6 million ounces (1,729.3 tonnes) is now only around 113 tonnes below China’s reported gold reserve of  1,842.6 tonnes – and if Russia carries on buying at the 200 tonne/year rate and China continues to report zero month-by-month rises, Russia will officially surpass China as the world’s 5th largest national gold holder, as tabulated by the IMF, in Q1 2018. Not that we really believe the China reported figure though!