We commented just over a week ago on the latest gold withdrawal figures from the Shanghai Gold Exchange (SGE) for December and what they signified in terms of the ebb and flow of China’s gold consumption (See: Chinese gold demand still picking up – but slowly.)  We, as do some others, equate SGE gold withdrawals as a pretty accurate indicator of Chinese gold consumption, although this is usually disputed by some specialist analysts who tend to come up with far lower figures – although the SGE data seems to correspond far closer to known Chinese gold imports plus the country’s own gold production, plus a small allowance for unknown imports and scrap conversion.  (China remains the world’s largest gold producer from its own gold mines plus additional amounts from its big custom smelting and refining sector.  2020 output was probably in the order of 365 tonnes assuming the gradual decline in output over the past few years has continued.) 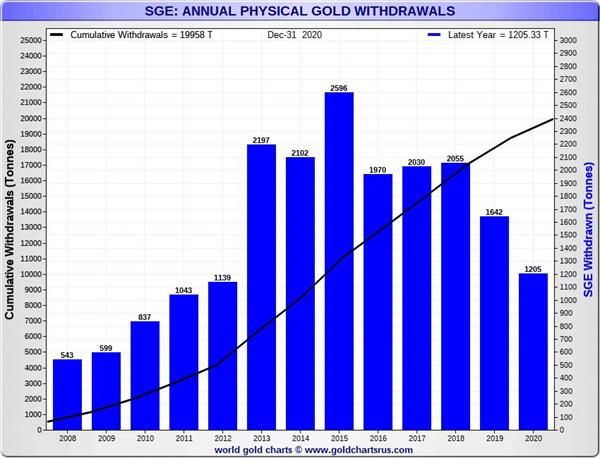 As can be seen, last year’s COVID-affected SGE gold withdrawals were the lowest since 2012 and less than half those of the record 2015 year.  Given that China seems to have survived its COVID onslaught last year pretty well – indeed it has even reported a 2.3% rise in its annual GDP for 2020 - we reckon that failing a serious resurgence in coronavirus infections this year, the country’s annual gold consumption will begin to rise again.    The value of holding some gold against adverse economic eventualities will have been brought home by the stark reality of last year’s anti-virus control measures and now that the country’s economy has started to grow again we suspect the incentive to own some gold by the country’s general population will have been advanced.

As we have pointed out before, a resumption of China’s gold demand is a fillip world gold demand needs right now with central bank buying and ETF gold inflows apparently diminishing in volume.  While there is a chance that both will pick up during 2021, one can’t be sure that this will happen, particularly if the Presidential transmission in the U.S. goes smoothly.  Mitch McConnell, the Republican leader in the U.S. Senate, is certainly making the right noises regarding working in a bi-partisan manner with Joe Biden’s Democrats in some areas, although whether some of the Trump-supporting remnants in the U.S.’s upper house will support him, or indeed whether McConnell’s seemingly conciliatory rhetoric is just lip service, still remains to be seen.

Nevertheless the political divide in the U.S. has never been more apparent and with a number of global flashpoints to be negotiated – and undoubtedly others are yet to spring up – the U.S. and the world remain in political flux.  A difficult year for the new U.S. Administration as the world’s still leading economy, lies ahead and this will increasingly be challenged by China in particular, perhaps aided and abetted by Russia, which both remain ideologically opposed to much of the U.S.’s foreign policy initiatives.  Thus a bi-partisan approach will be increasingly necessary in both U.S. domestic and foreign dealings and that this will happen is certainly no foregone conclusion.  We live in an increasingly difficult political environment which should be positive for gold long term.