With Swiss gold imports and exports providing such a reliable window on worldwide gold flows, the latest figures for February will have been viewed with particular interest given the Ukraine war situation.  With the Russian invasion only commencing on the 24th of that month, it is too early yet to see the direct consequences of the war, although there will have been some nervousness in the gold markets ahead of that date as Russia’s intentions were then still uncertain.  There will also have been some direct impact, though, on flows right at the end of the month.  The March figures when they come out in just under a month’s time will perhaps give us a better idea of any impact, if any, on global gold flows.

What the February figures do show is that export volumes had indeed begun to pick up a little.  Global geopolitical uncertainty will always likely boost gold take-up in traditional gold demand areas as investors seek to protect their wealth by accessing traditional safe haven investments.

As usual the country-by-country destinations of the Swiss exports continued to see the usual flows from West to East with China plus Hong Kong returning to be the largest recipient, followed by India which continued to import a substantial volume of Swiss re-refined gold.

The Swiss gold refineries are the historic leaders in independent gold refining worldwide taking gold scrap, doré bullion from mines, and large good delivery gold bars and refining them to the marginally higher quality and smaller size gold bars, wafers and coins most in demand in the global marketplace.  They refine, between them, around 1,300 tonnes of gold a year – a little over a quarter of the world’s total annual gold output despite the country having no domestic gold production itself 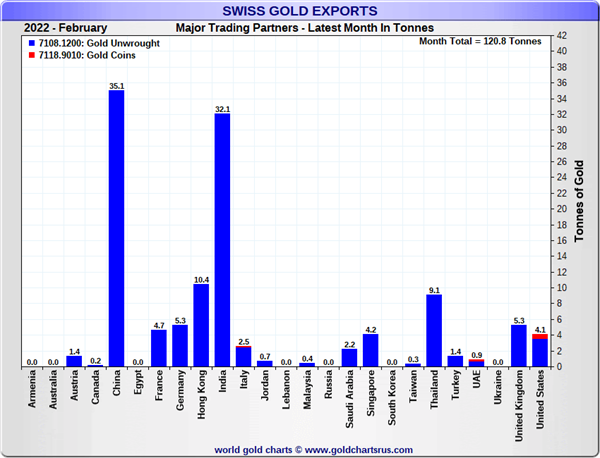 The destinations of the Swiss gold exports thus provide an excellent destination indicator of global gold flows with the world’s two biggest gold consumers topping the list once again. For February some 80% of the Swiss gold was destined for the Middle and Far East and South Asia where the gold is thought to be held in firmer hands and less likely to be sold on as speculative holdings.  With gold flows into the Gold ETF sector back to being positive again as well gold appears to be going through a strong demand phase which is, no doubt, being further enhanced by the Russian invasion of Ukraine – the more so as fighting there continues relatively unabated.

There is some evidence, although this does not seem to be being confirmed on the ground yet that Russia may be changing its tactics.  Its purported objectives now seem to be a concentration in taking over those parts of the Donbass region currently not fully under its control, and effectively merging them into the Russian Federation although Ukraine seems unlikely to accede to this without further resistance.

There are some ongoing peace negotiations under way in Istanbul with both sides seemingly willing to make some concessions on previously hugely entrenched positions.  There has also been a promise from Russia that the intensity of the assault on the key northern Ukrainian cities of Kyiv, the country’s capital, and Chernihiv will be reduced, although whether this is a realistic promise, or perhaps a tacit admission that the Russian advance has come up against a Ukrainian brick wall, still remains to be clarified.

While the conflict continues, which may be for some time to come, the gold price will probably remain elevated, although in part this will be the indirect consequence of the Russian invasion, rather than its reality.  Global inflation is running high, enhanced by the direct and indirect consequences of the sanctions being applied to the Russian economy, and the disruption to international trade caused by the war.  In combination Russia and Ukraine are major suppliers to world markets of key energy, metal and foodstuff-related commodities and interruptions to these are already having huge, and growing, inflationary consequences.  High inflation, coupled with low central bank-imposed interest rates, tends to be very positive for non interest-generating safe haven assets like gold, so the yellow metal’s price path looks like remaining positive for some time to come.