The continued accumulation of physical gold in Asia and the Middle East goes on regardless as shown by gold exports from Switzerland – the leading national conduit for gold bullion.  Switzerland has achieved this position through its refineries specialising in taking gold in unmarketable forms and importing dore bullion from mines and refining, or re-refining it into the sizes and purities in demand in the eastern market place.  This is combined with the great reputation of Switzerland in the gold marketplace and as a conduit for such activities.

Although Swiss gold exports in 2017 were the lowest in 11 years they were still substantial at over 1,600 tonnes. That is equivalent to half the world’s annual new mined gold output, and with China the world’s largest gold miner already, and a known non-exporter, the Asian and Middle Eastern regions will have accumulated at least 65% of global gold output adding up the imports from Switzerland plus Chinese domestic production alone.  But other countries also export gold directly to Asian and Middle Eastern refineries and we would guesstimate that perhaps 80% of all the gold bullion moving around the world may be ending up in these regions – a huge proportion of what remains the world’s No.1 monetary asset (in our opinion at least).  With bitcoin continuing to crash – it has lost almost 60% of its value from its peak in December and could well crash much further as scared investors offload on the way down – gold may be again coming into its own as a key investment asset class in the minds of investors seeking to preserve their wealth.

In December, Swiss gold exports followed the pattern established over the year with India the no. 1 individual destination with 32.3 tonnes - or around 21.5% of the total – closely followed by China (25.7 tonnes) and Hong Kong (21.1 tonnes).  Assuming that most, if not all, the Hong Kong exports are also bound for the Chinese mainland, greater China was thus the biggest recipient of the Swiss gold.  Overall around 86% of Switzerland’s December gold exports (totalling 150.4 tonnes) was destined for Asian and Middle Eastern nations.

If we look at the full year 20i7 figures for Swiss gold exports – neatly laid out in the bar chart below from Nick laird’s www.goldchartsrus service – we see that these proportions pretty well mimic the full annual picture: 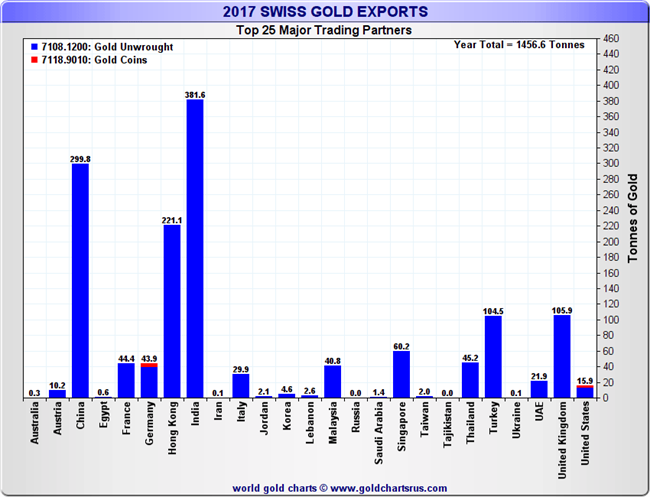 This chart shows that over the full year around 81.6% of the Swiss gold was headed for Asia and the Middle East with India the biggest individual national importer with 26.2%, but with China and Hong Kong combined taking 35.8%.

The other point which is apparent from the Swiss gold export figures is something we have stressed continually over the past year – that Hong Kong gold exports to mainland China can no longer be seen as a proxy for Chinese gold imports – or even a rough guide.  Mainstream media, and some analysts who should know better, still seem to equate the regularly published Hong Kong gold export figures as such, but as the Swiss figures show the greater part of mainland China’s gold imports now comes in direct – avoiding Hong Kong altogether.  This percentage of direct imports appears to be growing.

The figures also show that there has been a major recovery in Indian gold imports last year after a very low 2016 figure, but still Greater China remains comfortably the biggest importer – and if you add China’s own gold production of perhaps 450 tonnes last year into the mix, as well as direct imports from a number of other countries, China remains easily the world’s No. 1 accumulator of gold – although the breakdown of where this gold actually goes internally is rather less certain – hence the seeming anomalies in the nation’s estimated consumption figures from the big precious metals consultancies like Metals Focus and GFMS.