LAWRIE WILLIAMS: Swiss gold exports – India surges back on top in May

For most months in the past year or so, the primary recipient of gold exports from the Swiss gold refineries has been Greater China (Mainland plus Hong Kong) with that other top gold consumer, India, as something of an ‘also ran’.  But recently we have reported that Chinese demand may be slipping, while India’s is picking up and the latest figures from the Swiss Customs Administration confirm this point strongly.  India has now been easily the  top rcipient of Swiss gold exports for 2 months in a row.

Indeed, for the month of May, Indian imports of gold from Switzerland accounted for over half the latter nation’s gold exports, amounting to 53.2 tonnes while Mainland China and Hong Kong between them received only 22.5 tonnes of gold from the Swiss refineries.  These refineries specialise in re-refining larger ‘good delivery’ gold bars, doré  bullion from mines around the world and gold scrap, converting it into the smaller sizes of ultra high purity gold most in demand in the key Asian markets.  The Swiss refineries have largely cornered the market in this business, exporting, for example, some 1,473 tonnes of re-refined gold last year.  This year overall gold exports from Switzerland seem to have been on the decline but will still likely be around between 500 and 600 tonnes in the first half of the year and may well pick up in the second half = particularly given the recent significant rise in gold prices.

Once again the vast majority of Swiss gold exports were destined for Asian and Middle Eastern markets – around 80.5% and it was perhaps significant that the total exported to Mainland China far exceeded than to Hong Kong once again demonstrating that the latter’s consumption and trade can no longer be taken as a proxy for China as a whole.

See the following chart from Nick Laird's goldchartsrus.com site for a graphical represntation of India's dominance in May: 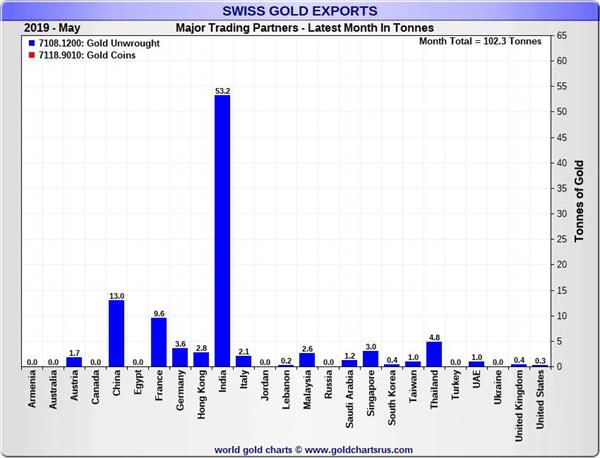 Another perhaps significant trend in Swiss gold exports can be seen in small, but significant, volumes going to key European nations France (9.6 tonnes), Germany (3.6 tonnes) and Italy (2.1 tonnes).  This could indicate a pick-up in Western demand for gold within Europe.  These levels need to be watched in future months.

But overall the latest Swiss gold export figures confirm the continuing flow of gold from West to East, with Asian demand in particular seen as remaining in stronger hands than in the West which sees more volatile trading patterns.  Even so the massive increase last week of gold taken into the world’s biggest gold ETF, GLD, (see:  GLD adds massive 35 tonnes of gold Friday) and another small accumulation yesterday, suggests gold is coming back into investment favour with the big money! Generally nervous equities markets have only served to accentuate the trend.  Chinese demand may, for the time being, have weakened due to nervousness over U.S. imposed tariffs, but underlying demand there also looks to be positive and with domestic production seemingly falling there has to be a good chance that imports will have to strengthen to counter any shortfall.