In the runup to the Chinese New Year (which in 2018 falls on February 16th), the country’s gold imports tend to pick up and  this year is no exception with mainland China the largest recipient of Swiss gold exports in November, followed by Hong Kong.  The actual figures were Mainland China 34.9 tonnes and Hong Kong 29.2 tonnes.  With most of the latter likely to be for export on to the Chinese mainland, the Greater China total was thus a pretty decent 64.1 tonnes.  India, which had topped the monthly listings of Swiss gold exports for much of the current year, came in in third place with November imports from the Swiss refineries of 26.1 tonnes. (Nick Laird’s excellent chart displaying the latest Swiss gold export figures on his www.goldchartsrus.com website is set out below). 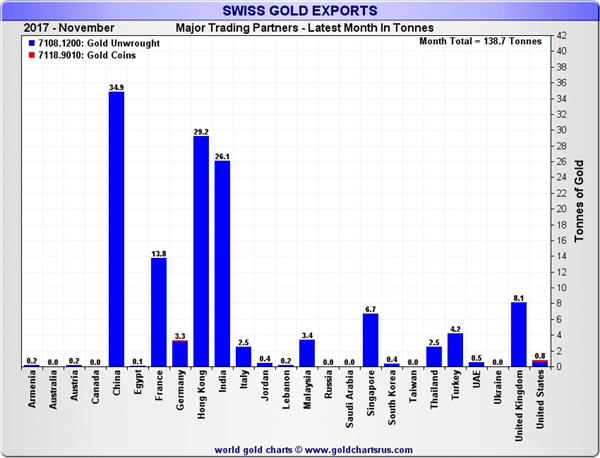 As usual the chart demonstrates the strong flows of physical gold from west to east with Asia and the Middle East taking over 78% of the Swiss gold.

It also highlights the diminishing role of Hong Kong in Chinese gold imports.  We have been making the point for some time now that gold flows in and out of the former British Crown Colony are no longer a proxy for China’s gold imports with far more gold entering the Chinese mainland directly, completely bypassing Hong Kong, to add to China’s own gold production – China is comfortably the world’s largest gold producer - although some sectors of the global media disregard this fact in their reporting!

The gold flows too should be significant in the context of the global gold price.  Eastern hands tend to be firmer than Western ones – holders tend to hang on to their gold and not trade it.  They see it as a true store of wealth, mostly only drawing on it in necessity rather than when the price rises by a few dollars.  China for example, imports gold, but by law does not export it.  Over time this has to have an impact on supply availability, particularly given that, if anything, peak gold has been reached in terms of production and global new mined gold output is beginning to turn down, albeit very slowly at first.