We have been hearing from several sources that China, for the past several years the world’s largest importer of gold, is now curbing gold import levels by reducing quotas available to companies and institutions which import gold.  The last couple of months of gold export figures from Switzerland, perhaps the biggest exporter of gold to China, would seem to bear these reports out.  Latest reports confirm the curtailment but suggest that the authorities have eased this a little.

In June, China only imported around 6 tonnes of gold from Switzerland – down 53% on its imports in May, which were already trending downwards at only 13 tonnes.  And now the latest figures from the Swiss Customs Administration for July put direct exports to mainland China that month at 9.8 tonnes.  By contrast mainland China imported on average some 38 tonnes a month of gold from Switzerland in 2018.

Figures published recently by China’s Business Times put total Chinese gold imports from all sources at around 1,500 tonnes in 2018 which, together with China’s own gold production at a little over 400 tonnes and an allowance for scrap, puts China’s 2018 gold consumption at around +/-2,000 tonnes.  We have always equated Chinese annual gold accumulations to the Shanghai Gold Exchange (SGE) gold withdrawal figures, which totalled 2,054.5 tonnes in 2018 and although this is disputed as a measure of Chinese consumption by the major gold consultancies, we stand by our interpretation as being far closer to the announced figures for Chinese imports plus own gold production plus a scrap allowance than consumption estimates from any other source.

Interestingly, we have also noticed a downturn in SGE gold withdrawal figures so far this year, which would also seem to confirm a degree of import restrictions coming into play.  We had supposed we would see a pick-up in these in the second half of the year, but in the light of the reported import restrictions we suspect we will see further falls in this year’s month-by month figures.

Business Times, which tends to be something of a mouthpiece for the Chinese government, puts the policy on restricting gold imports down to the impact of the U.S. prompted ‘trade war’ between the two nations with the import restrictions helping boost China’s payments balance further and strengthen its currency against the possible impact on the economy of the U.S.-imposed tariffs.

The newspaper gives further detail in reporting that China imported around 308 tonnes less gold in the first half of the current year than in 2018 – and the July figures will take the reduction even further.  To date this will represent a current account saving of around $25 billion based on current market prices for gold.

Coming back to Swiss gold exports a bar chart showing country by country figures for July is shown below: 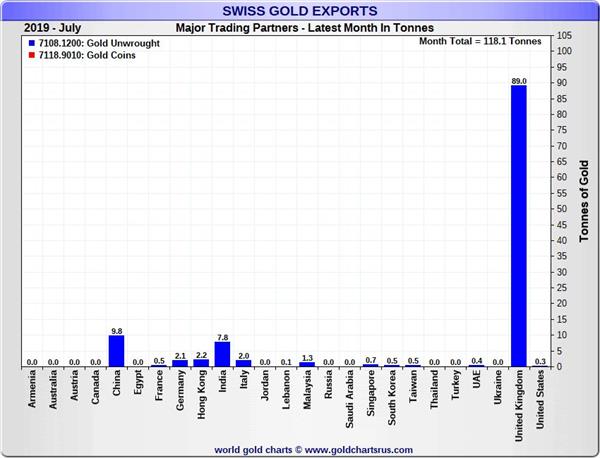 As can be seen, destination Asia, which has been the principal recipient of Swiss gold exports in the past, has paled into virtual insignificance with a huge volume re-exported back to the UK – usually the principal source of Swiss gold imports.  Reports put this down to big inputs into the principal gold ETFs which have their gold principally vaulted in London.  Notably, in addition to the now low levels of gold being exported to China and Hong Kong, exports to India have fallen off a cliff as well.  The suggestion here is that the recent higher gold price has led to buyers holding off and looking for a possible fall before re-entering the market.  This stand-off will likely persist until either the price falls back, or purchasers just get used to the higher price levels.