Judging by the latest month of Swiss gold export figures, Indian gold demand has really been picking up very strongly so far this year. Every month this year so far India has been the top destination for Switzerland’s re-refined gold having imported 68.1 tonnes in May bringing the year to date total for Swiss gold exports to India to a sizeable 235.3 tonnes.  If gold imports from Switzerland continue at the current rate for the remainder of the year they could reach 560 tonnes. And historically India imports a little under half its gold from the European nation, so a full year total of 1,000 tonnes plus is not out of the question.

Why is Switzerland so important in the gold flow chain?  I have covered this before in these pages, but for those still unaware Swizerland is the location for four of the world’s biggest independent gold refiners – Heraeus, Metalor, PAMP and Valcambi and all these specialise in re-refining the bigger LBMA good delivery gold bars, gold scrap and doré bullion into the sizes of product most in demand in Asian and Middle Eastern nations.  Thus Switzerland is one of the primary suppliers of refined gold to the world’s two biggest gold consumers, China (some of it via Hong Kong – mainland China and Hong Kong are treated as two separate destinations in the Swiss statistics) and India, and at the moment the latter is importing far more Swiss re-refined gold than the former.

All the destinations for Swiss  re-refined gold in May can be seen in the below bar chart from Nick Laird’s excellent, and hugely informative, www.goldchartsrus.com website. 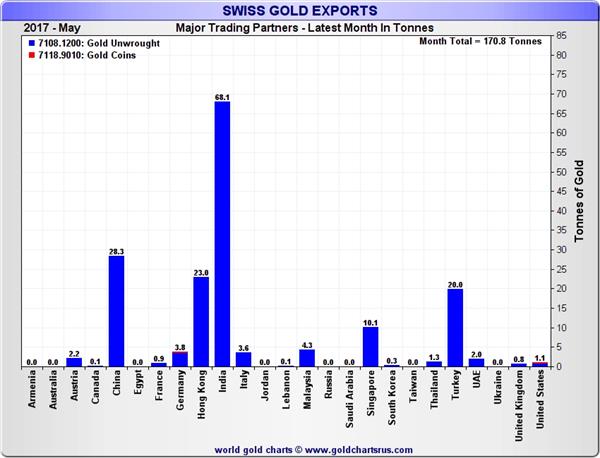 As can be seen from the chart, India, in May, imported more Swiss gold than mainland China and Hong Kong combined.  The only other significant importers were Turkey and Singapore – the latter trying to establish itself as another Asian gold hub.  If one includes Turkey, Asia and the Middle East accounted for comfortably over 90% of Swiss gold exports confirming again the continuing flow of physical gold from West to East.

However there is a slight anomaly in this assessment provided by the corresponding Swiss gold import figures.  Although the imported gold primarily came from the UK and from major gold producing nations, some 20% flowed in the reverse direction – principally from the United Arab Emirates and Hong Kong, continuing a pattern we have been seeing of late.  These are normally gold consuming nations and while some of this flow may be scrap and unsold gold artefacts being returned for re-refining, and some may be from profit-taking given a rising gold price, some could also be from destocking with demand perhaps not meeting anticipated supply.

But back to the levels of Indian gold imports.  We should probably expect a fallback for the next three months.  There will have been an element of restocking ahead of the GST decision on gold in early June, although in the event the tax imposition on gold was probably right at the lower end of expectations.  However by late September imports may well start rising again with the post-Monsoon harvest in and in the runup to the late year festival and wedding seasons.

The mainland China and Hong Kong Swiss gold export figures confirm again that Hong Kong is losing its pre-eminence as the principal import route for gold into mainland China and exports to China from the Special Administrative Region can no longer be taken as a proxy for total Chinese gold imports.  Perhaps as much as half, or more, of the gold flowing into mainland China nowadays is going in directly, bypassing Hong Kong altogether.  Chinese demand remains robust but doesn’t look like coming anywhere near the record 2015 figures.