We regularly report on the announced gold import and export figures from Switzerland as, in our opinion, they provide an excellent guide to the state of the non-North American and European gold supply/demand picture.  Historically, Switzerland’s gold refineries process, and distribute, an amount of gold equivalent to well over half the global new-mined gold output.  In some year this amount expands to over 70%.  So, despite having approximately zero gold output of its own, Swiss gold imports and exports tend to provide a valuable pointer to gold demand levels – particularly in the key south and east Asia gold markets.

So far this year, the vast majority of the Swiss gold exports have been destined for India – the world’s second largest consumer of the precious metal.  Up until now the world’s largest consumer, China, has only been a relatively small recipient, but as the world’s largest gold producer we had surmised that Chinese domestic demand will have been served by the country’s own production, although a month ago we noted that Chinese gold imports from Switzerland – either directly or through Hong Kong – had been beginning to pick up a little.

The latest figures released by the Swiss Customs Administration, covering the month of April’s figures, have confirmed this trend.  Indian imports of Swiss gold remain the largest, coming in at 57 tonnes, well down on the previous month’s figure but hardly surprising given the worrying coronavirus statistics coming out of that nation.

China and Hong Kong combined accounted for 51.1 tonnes of te Swiss gold exports in April, a huge pick up from figures reported earlier in the year.  Total Swiss gold exports for the month came in at 133.9 tonnes. Probably equivalent to around half global new-mined gold output in April, thus confirming Switzerland as a key conduit for global gold distribution. 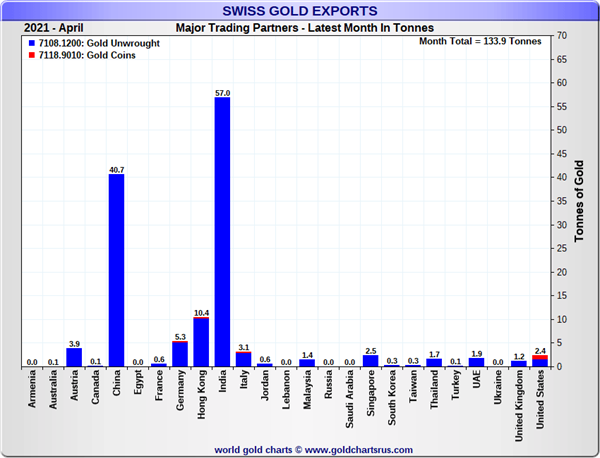 Switzerland is not the only exporter of gold to China.  Its strong position results from its gold refiners taking in gold scrap, doré bullion (partially refined gold) from mines and larger gold bars and re-refining them into the sizes and purities in demand in Asian markets in particular.

The pick-up in Swiss gold exports to China and Hong Kong had also been fairly predictable given it had been reported that China's central bank had granted commercial banks permission to import large amounts of bullion in April and May and it was thought that up to around 150 tonnes of gold was likely destined to be imported as a result.  A significant proportion of this was always likely to come in via the Swiss refineries, with the balance coming in from countries from which China has always imported gold directly.

Thus the latest figures from Switzerland suggest that global gold trade is just about getting back to normal with China and India remaining the world’s two gold consumption giants.  The fall back in Indian imports from Switzerland, though, may well be indicative of a declining trend in the latter’s gold consumption over the remainder of the current year, while the rising Chinese figure will likely show up in the Shanghai Gold Exchange gold withdrawals data, which we take as a guide to overall Chinese demand, for May when that is released in the first half of June.