Gold exports from Switzerland are an excellent indicator of the strength of the gold flows from the West to the East and while the February overall figure was a low 88.7 tonnes, compared with total imports of 139 tonnes, the make-up of these totals in itself tells an interesting story.

The top recipient of Swiss gold exports in February was India – comfortably – with 37.2 tonnes confirming the reported pick-up in Indian gold demand so far this year as the populace got to grips with the withdrawal from circulation of Rupee 1,000 and 500 notes.  India is very much a cash society and much of the gold buying pressures comes from individuals making small cash purchases when their financial situation makes this possible – and last year’s monsoon rains, and subsequent harvest, were good increasing gold demand from the enormous subsistence agricultural sector – which traditionally forms a very significant part of gold demand in the subcontinent.

And then the next biggest recipient of Swiss gold last month was mainland China with direct imports of 21.5 tonnes, dwarfing the 7.2 tonnes to Hong Kong. (Indeed Hong Kong was a substantial net exporter of gold back to Switzerland – more of which later).  The direct flow of gold into mainland China again confirms that Hong Kong gold imports can very definitely no longer be considered a proxy for Chinese imports, nor flows from Hong Kong to the mainland be taken as anything more than an ever-decreasing indicator of overall Chinese gold consumption as more and more gold is taking the direct route. (See article: China 154, Hong Kong 39. Swiss Dec gold exports show remarkable gold flows which highlighted this situation with respect to a huge December figure for gold exports from Switzerland direct to mainland China).

A bar chart showing the breakdown of Swiss gold exports on a country-by country basis is shown below courtesy of Nick Laird’s www.goldchartsrus.com website: 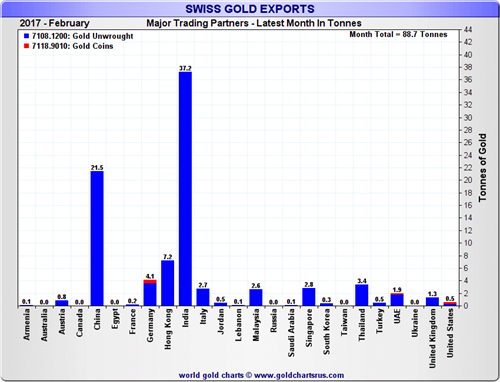 The Swiss gold imports are interesting too in that although the UK is again the largest source of imported gold, accounting for a little over 30 tonnes, the second and third largest sources were Hong Kong (26.5 tonnes) and the United Arab Emirates (UAE) with 16.4 tonnes.  Thailand also accounted for 9 tonnes of Swiss gold imports.  All three of these are traditional gold consuming nations so the fact that Switzerland is importing gold from them suggests, perhaps, light demand and destocking by traders, perhaps coupled with some scrap.  The higher gold price prevailing in February may also have stimulated some of these reverse flows.  See chart below – again courtesy of www.goldchartsrus.com. 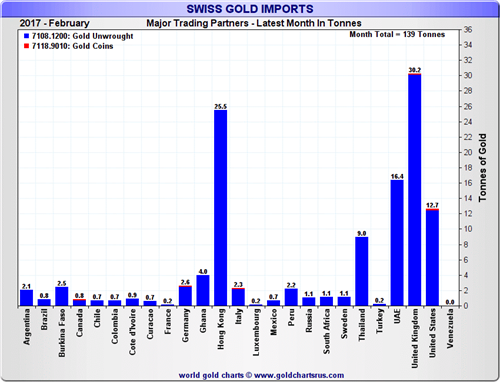 Most of the other sources of the Swiss gold imports are gold producing nations like the USA, Ghana, Burkina Faso, Argentina, Peru, Russia and South Africa, although one should perhaps see Germany and Italy as somewhat anomalous, although both were actually net importers of Swiss gold in February.

Switzerland is very much a conduit for gold flows from West to East, largely because of it being the location for four of the world’s largest independent gold refineries.  (Swiss refineries are reported by www.bullionstar.com to account for 65-70% of world refined gold output).  These refineries specialise in re-refining .995 London good delivery gold bars in 350-430 troy ounce sizes, and refining gold scrap, and producing the higher .999 purity and much smaller gold bars and wafers in demand in the East, as well as producing high purity gold coins for some nations.  Upwards of 1,600 tonnes a year of gold passes through these Swiss refineries, which is around half global gold production.  Indeed in 2013, when Chinese demand was booming and there were big liquidations out of the gold ETFs, it is reported that Swiss gold exports exceeded 2,500 tonnes (equivalent to nearly 80% of global new mined gold output that year).

So the importance of the Swiss gold import and export figures cannot be emphasised enough in terms of global gold flows and where they are coming from and going to.  In the latest month’s figures almost 85% of the Swiss gold exports were headed for Asia.  The West to East gold flows continue unabated.