Every month we have been keeping readers up to date with the Swiss gold export situation as a significant guide to global gold flows.  Over the years these gold exports have amounted to a volume equivalent to over half the global new mined gold total, and the latest gold export level from this small European nation, with its plethora of specialist gold refineries, fell a little short of this percentage at around 30% - still a hugely important figure relative to global gold production.

The Swiss refineries take doré bullion (semi-refined gold), gold-bearing concentrates, scrap gold and large high purity refined good delivery gold bars, and refine all this to the smaller sizes and higher purity gold in demand in the world’s principal gold markets – primarily in Asia and the Middle East.  China and India have, over the years, been the dominant customers for this Swiss refined gold, but so far this year, until now, India has been the predominant recipient, and China something of an ‘also ran’. 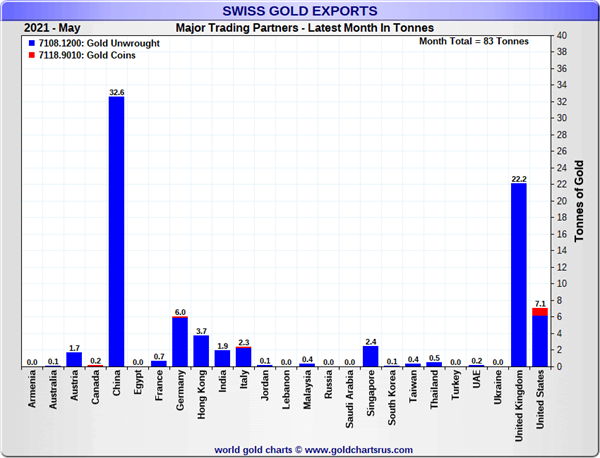 However, as the above bar chart shows, mainland China and Hong Kong between them accounted for 36.3 tonnes (or 44%) of the Swiss gold exports in May according to figures released by the Swiss authorities, with COVID – hit India, having been the dominant recipient in the first four months of the year, before the pandemic had really had quite such an impact,  seeing imports of Swiss gold fading to only 1.9 tonnes in the latest month – behind the UK, U.S., Germany, Singapore and Italy.  China/Hong Kong imports had begun to pick up in April and May figures were a little lower than the combined 51.1 tonnes seen that month. But it should also be recognised that the total Swiss gold export figure for May at 83 tonnes was also substantially lower than the 133.9 tonnes reported in April so the percentage shipped to China/Hong Kong was actually a little higher in May.

On the balance of the Swiss gold exports in May, the UK represents the centre of the global gold trade, while the U.S. and Germany are two of the world’s largest gold consumers (after China and India), while Singapore has designs on becoming the Far East’s principal global trading centre – currently a position held by Hong Kong.  Thus the high import figures for these nations are not too surprising.  That is apart from the huge fall in Indian imports from 57 tonnes in April, but this could be due to timing coupled with something of a fall-off in Indian demand in May due to the virus pandemic and a higher level in gold prices in the month.

While the May figures for Swiss gold exports were interesting in that they showed the continued dominance of the combined gold flows to Asia and the Middle East at around 51%, it was still far short of the around 80%  levels seen in earlier years.  This may represent a sea change in the global demand pattern, which will have been thrown into disarray by the COVID-19 pandemic.  We look forward to future Swiss figures, which may throw a new light on the true state of global gold flows.