We always keep a strong eye on the levels of Swiss gold imports and exports and their sources and destinations.  Although Switzerland is a small landlocked nation, it punches way, way above its weight in terms of global gold flows, despite having zero gold production of its own, largely for historical reasons which led to this small European nation becoming the world’s largest global refiner of gold.

At its peak, the Swiss gold refineries processed an amount equivalent to over half the world’s annual total of new mined gold, and currently accounts for around 40%.  Given that China mines probably over 10% of the world’s newly mined gold, but does not allow gold exports, Switzerland’s share of global gold refining, and exports of refined metal, remains dominant,

The Swiss gold refineries specialise in processing doré bullion (partially refined) from mines, gold scrap and large LBMA defined good delivery gold bars and re-refining this into higher purity and smaller sized gold bars, coins and wafers.  These account for the bulk of the gold demand in international markets – particularly from small individual investors in Asia, which still accounts for a major part of global gold investment demand.

In recent months we had noted that a high proportion of Swiss gold imports had been coming from countries/areas which had primarily been gold consumers.  This we attributed to the liquidation of excess stocks and some profit taking due to higher gold prices relative to the time this gold had been purchased.  However, recently the gold price has slipped, so the profit-taking element will have mostly fallen away, while gold stocks held by traders and fabricators may have fallen back to perhaps more realistic levels.

As can be seen from the above bar chart of Switzerland’s gold imports from February this year they have pretty much defaulted to coming from gold mining nations, with the exception of the UK, which has always been a major contributor to Swiss gold imports from its position as the centre of global gold trade, and its supply of LBMA large good delivery gold bars for re-refining in Switzerland into the aforementioned smaller sizes in demand on global markets.  Other words the pattern of Swiss gold imports in February was just about getting back to normal. 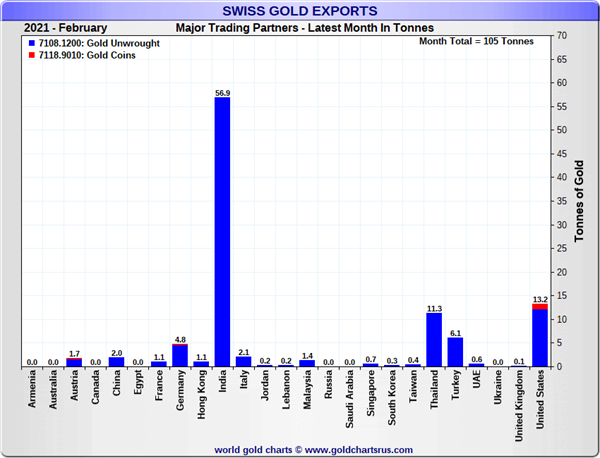 The gold export figures from Switzerland also seemed to be normalising with around 77% destined for Asia, including the Middle East and provided we include Turkey in this designation.  However a departure with old patterns is that flows to China and Hong Kong, were relatively insignificant campared with figures going back a couple of years.  However one should take into account that China does import some gold directly from producing nations like Australia and the U.S,. but perhaps most of all it produces more than enough itself to satisfy local demand for the time being.  We do keep a close eye on Shanghai Gold Exchange gold withdrawals as our take on overall Chinese gold demand (see: Global gold demand looks to be back on the rise?) and this does appear to be on the rise, albeit slowly.

But what is noticeable from the Swiss gold export figures is the dominance of that other powerhouse of global gold demand that is India.  Swiss exports to the Indian subcontinent came in at fully 54% of the nation’s total gold exports.  Taken together with the latest overall Indian gold import figures these are already showing a nice pick-up so far this year, and the recent easing of import taxes on precious metals will not do anything to harm the growth in that nation’s officiall figures.  With both Indian and Chinese gold demand rising again, this will at least do something to counter the apparent fall in gold ETF holdings and central bank purchases.  Swings and roundabouts!