As Switzerland produces no gold of its own, but specialises in re-refining LBMA good delivery gold bars and scrap gold into the metric and small sizes in demand in the East, it has to be a major gold importer to keep the refineries’ production going, as well as to supply its own investment demand and it is particularly interesting to review the sources of this gold for re-refining and exporting.  The www.goldchartsrus.com graphic of Switzerland’s gold imports is set out below and makes for extremely interesting viewing: 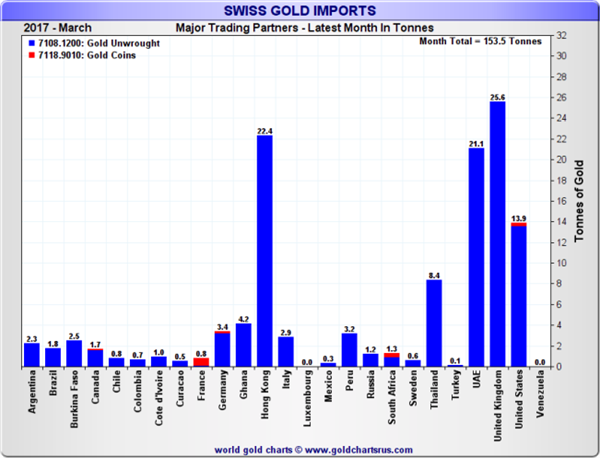 The biggest source of Swiss gold imports is usually the UK, which is not surprising as London has traditionally been at the centre of the global gold trade, but some of the other sources of gold for the Swiss refineries are a little more unexpected.  After London the three biggest sources of imported gold are Hong Kong, the UAE (primarily Dubai), and the USA.  The latter is not surprising at all as it is the world’s fourth largest producer of new mined gold, but the UAE and Hong Kong have to be considered as highly anomalous sources as they both produce little or no gold of their own, but are traditionally gold traders. Next in line comes Thailand – again usually a gold importer rather than exporter.  Most of the remainder of the source nations for the Swiss gold imports are indeed gold producers as would be expected.

But surely the ‘anomalous suppliers’ of imported Swiss gold need examination and comment?  Hong Kong as both an importer and exporter of gold from and to Switzerland is a particular case in point.  In March the Chinese Special Administrative Region was a net importer of Swiss gold – but only just!  It imported 24.0 tonnes, but exported 22.4 tonnes back making it a net importer of only 1.6 tonnes.  Does this suggest that greater Chinese demand is not quite as strong as we have been assuming?  Or perhaps it’s just that dealers and fabricators bought too much gold in the runup to the Chinese New Year and are taking a profit by reducing inventory now that prices are higher than when they purchased the gold in the first place.

Indeed profit taking by traders and fabricators may well be behind the large net gold import figures into Switzerland from both the UAE and Thailandas well.  Much the same happened in 2016 when gold prices increased from their 2015 levels.  One suspects imports from these sources will slow with the recent gold price falls, but could pick up again if prices rise in the second half of the year as many pro-gold commentators suggest they will.  Today the gold price has fallen back further – at the time of writing below $1,250 – but are probably weak ahead of the anticipated statement from the FOMC meeting and, depending on its content could move down further, or back upwards.  It remains to be seen.

With so many geopolitical uncertainties abounding – the next likely one is the French Presidential election runoff this weekend.  That is looking increasingly like a victory for Emmanuel Macron which, as the seemingly safer option could bring the gold price down a little further if the expected happens.  But there are other flashpoints which could again change gold’s direction as could continuing difficulties for President Trump in getting his proposed legislation through Congress.  As usual precious metals investment is proving something of an unpredictable phenomenon.  We would anticipate that gold is still likely to end the year above where it is at present, but the jury is still out on that!  It could easily go the other way too with the prospect of a couple of Fed interest rate hikes still in the pipeline.