Switzerland remains an important conduit for the movement of refined gold around the world and the volume handled each year by the small Alpine nation’s gold refineries is equivalent to over half annual new mine global gold output.  Given that China remains the world’s largest producer of gold annually (about 11% of global gold output), and exports none of this production, Switzerland’s dominance of overall movements of global refined gold becomes even more significant, so its announced monthly gold import and export figures are of particularly strong interest to gold followers.

This year we will almost certainly see an overall reduction in global new mined gold production, if only because of temporary closures and coronavirus mitigation measures imposed on some key gold mining operations.  The industry was already hovering at, or close to, peak gold production so any such measures will have resulted in an overall fall anyway.  So far this year Swiss gold imports have totalled 1,071 tonnes, equivalent to a 2020 first half output total of a little over 800 tonnes – which works out at almost exactly 50% of the World Gold Council’s latest estimate of global gold production in the first half of the year.

Swiss gold exports so far this year come to a rather lower 782 tonnes, but appear to be picking up.  The shortfall is so far due to a drastic reduction in the export of Swiss gold to its traditional main markets in Asia and the Middle East.  However the figure for gold exports in August show a big pick-up in the volume going to the world’s second largest consuming nation – India – which took 22 tonnes and what may be the beginnings of an important rise from the world’s largest consumer – mainland China – which took 9.6 tonnes.  Perhaps significantly, Singapore which is making an attempt to rival Hong Kong as the region’s principal financial and trading  centre, imported 6.6 tonnes.  Interestingly no gold appears to have been exported to Hong Kong in August, further emphasising the decline of the Chinese autonomous territory in international gold trade, and as a proxy for Chinese gold imports.

The two charts below are from Nick Laird’s goldchartsrus.com website in Australia.  Nick offers a statistical and graphical service covering many aspects of the international trade in gold. 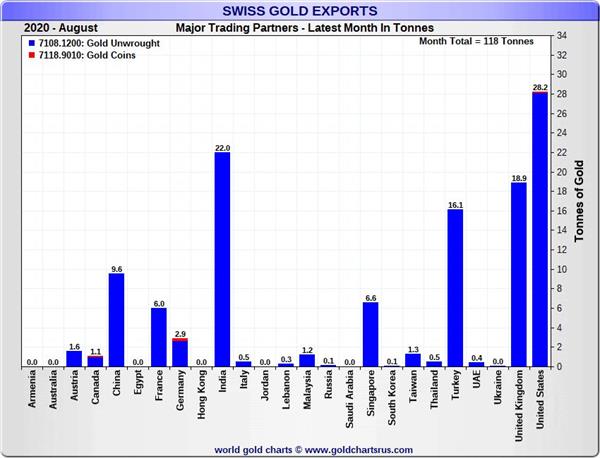 The other principal recipients of the Swiss gold exports were the U.S. with 28.2 tonnes. The UK, which vaults a high proportion of ETF gold holdings, with 18.9 tonnes, Turkey, which is rapidly building its gold reserves, with 18.1 tonnes and France with 6.0 tonnes.  Other European nations to figure were Germany with 2.9 tonnes and tiny Austria with 1.6 tonnes – both countries known for strong interest in investment gold.

The Swiss import statistics also throw up some interesting trends – albeit a continuation of other recent Swiss gold movement data.  In addition to importing gold from many gold mining nations, probably as doré bullion, it also received considerable amounts from some traditional gold consumers – notably Hong Kong from which it received 25.5 tonnes, Thailand (27.4 tonnes), the United Arab Emirates (15.4 tonnes) and Italy (7.3 tonnes).  These imports will have come from the running down of stocks due to reduced demand, and also due to profit taking as gold prices peaked in August.  Imports from France were also interesting as they included a substantial amount of gold coins for remelting and re-refining - perhaps also an indicator of increasing scrap sales, again probably because of the attraction of high gold prices. 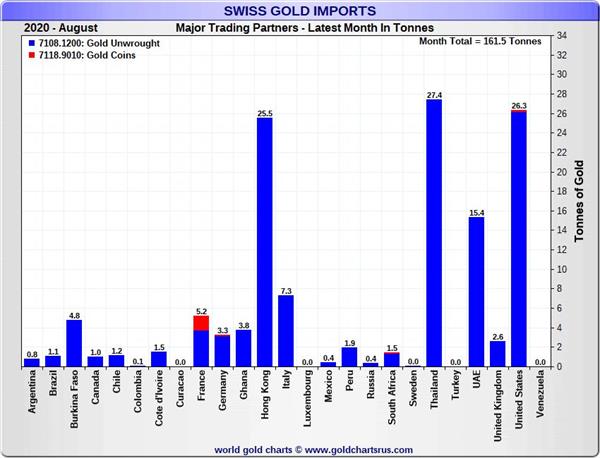 The other anomalous figure in the Swiss import statistics is the volume imported from the U.S. at 26.3 tonnes.  The U.S. is a major gold producer in its own right but does not mine as much as 26 tonnes in a month.  Last year, according to Metals Focus, it produced around 200 tonnes (16.66 tonnes a month on average) so the August total likely includes a substantial portion of gold scrap – as well as liquidated gold coins – which would again be a result of profit taking.  However an almost identical amount came back as re-refined, probably higher-purity gold, leaving a net balance of near zero.  There was undoubtedly demand for high purity refined gold, but perhaps in small sizes which could meet individual investor demand.  It will be interesting to see what happens with the September figures given the sharp fall in the gold price.

Overall therefore, the Swiss import and export figures provide an extremely interesting insight into international gold flows with the small country punching way beyond its weight in terms of gold refining and distribution.