A Reuters article on the latest Swiss gold import and export figures approaches the subject as if the figures they are discussing represent a new paradigm in Swiss gold trade figures.  But it is not – it is purely a continuation of a pattern which we have been commenting on for some months now.  According to the Reuters commentary (See: Swiss gold exports to Asia tumble as bullion flows to London), “Switzerland’s gold exports to China and India dwindled in September, with the country instead importing record volumes of bullion from Hong Kong and sending metal to Britain, customs data showed on Tuesday.“

Reuters is a bit late to the game.  This pattern has been apparent for some months now and instead the latest figures suggest that exports to India in particular are actually beginning to pick up a little – figures borne out by statistics beginning to come out from this major gold consuming nation – indeed Swiss gold exports to India had already begun to pick up sharply in August and the September figure almost matched that for August – for August figures see Swiss gold imports suggest some profit-taking, but exports to India pick up.  A graphic showing Swiss gold exports for September is shown below.  Note also a fairly substantial amount was destined for Turkey which has become a major destination for gold this year. 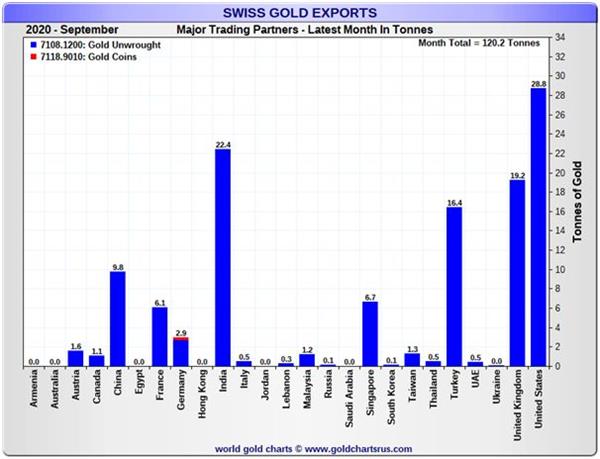 We have also noted  that Chinese demand, as represented by gold withdrawals from the Shanghai Gold Exchange (SGE) also seem to be picking up strongly with September’s gold withdrawals from the SGE substantially higher than for the same month a year ago, although still short of 2018 levels (See: Much stronger month for Chinese gold demand in September).  These increased demand figures obviously haven’t yet filtered through in terms of Swiss gold exports yet,

The other major destinations for Swiss gold in September were the UK, as noted by Reuters, but given the steady flow of gold into gold ETFs with the biggest ones vaulting their gold holdings in London, this is not surprising and the volume is actually marginally lower than in August; the U.S. where gold bullion demand appears to be running high; and Singapore which is set on replacing Hong Kong as the principal southeast Asian trading hub.

The Reuters article is correct, of course, in that Switzerland is indeed importing substantial amounts of gold from hitherto mainly gold consuming nations like Thailand and Hong Kong, but we put this down to a mixture of running down gold inventories surplus to current local demand, and profit taking given recent higher gold prices. 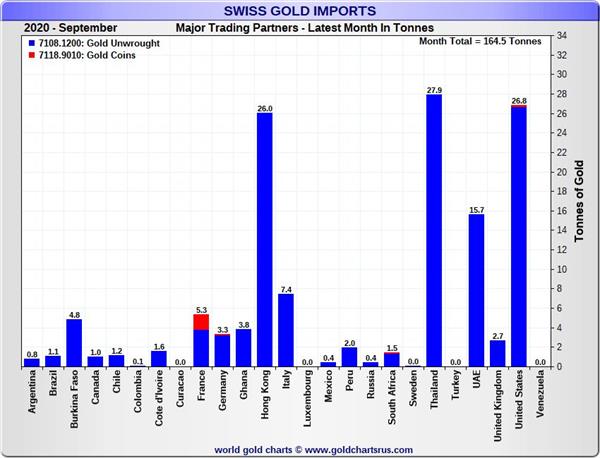 In short, there’s little in the pattern of Swiss gold imports and exports in September to differentiate them from the August patterns.  Interestingly there seem to be a substantial number of gold coins flowing from France to be re-refined in Switzerland, but this is, no doubt, a function of those individuals and funds which have stored gold bullion in coinage form against a rainy day taking advantage of the higher gold price and turning these assets into hard cash.  France has been particularly hard hit in the past couple of months by the COVID-19 pandemic and savers there have a history of gold accumulation.  It’s not too hard to assume that the two factors are related.

Otherwise the Swiss gold imports in September have largely come from gold producing nations plus an element of profit taking from traditional gold-hoarding countries.  We therefore consider that the Reuters story is misleading in its emphasis – be wary of articles from organisations where the writers are not close followers of precious metals markets.