The latest Swiss gold export figures serve to confirm a continuing strong pick-up in gold demand from India with that nation accounting for fully 60% of the small European nation’s refined output ending up there.  All in all India imported 82.9 tonnes of gold from the Swiss refineries in March.   Over the first quarter India imported around 178 tonnes of gold from Switzerland, a figure that if sustained over the year would alone represent the equivalent of around 20% of global new mined gold production.

The importance of the Swiss gold export figures in terms of the global consumption pattern, cannot be overstated.  The country has over the years built up a quite remarkable refining capacity in converting doré bullion from mines, gold scrap, and large good delivery gold bars into the smaller sized, higher purity, units most in demand worldwide, and in particular in the gold-hungry Asian markets.  In some years Swiss refineries have processed an amount of gold equivalent to well over half worldwide new gold output, and the March figure comes close to that level at around 49%.

For the latest month, some 85% of Swiss gold exports were destined for Asia and the Middle East.

In the past, India and China/Hong Kong, have been the primary destinations for the Swiss gold refinery output, but so far this year India has been by far the largest recipient – China is still playing catch-up taking only 8.7 tonnes of Swiss gold in the latest month.  However, we anticipate this volume will rise sharply given the recent announcement that Chinese banks will be allowed to import more gold this year.

Also from past Swiss gold import figures it appears that Hong Kong gold stocks have been significant enough to allow some re-exports back to Switzerland – presumably mostly gold scrap – but these volumes had declined to a trickle in March. Meanwhile reports have come in that net gold imports from Hong Kong to China, rose to 16.55 tonnes in March, compared with 4.19 tonnes in February and 13.52 tonnes a year earlier.

China is also, as we have pointed out before, the world’s largest producer of gold and is thus more than capable of meeting any pent up domestic demand, given its seeming recovery from the coronavirus pandemic, from its own resources for now.  Some had assumed that the bulk of China’s own gold output had been going into its central bank’s gold holdings, despite the country not announcing any such increases.  China does have a track record of only announcing rises in its monetary gold reserve after long intervals of time while reporting zero increases on a month-by-month and annual basis.

It will therefore be particularly interesting to assess the country’s gold withdrawals for April from the Shanghai Gold Exchange (SGE) when they are next released in some 2-3 weeks’ time.  We have always viewed SGE gold withdrawals as an indicator of the nation’s ongoing overall gold demand and consumption so we are anticipating perhaps a sharp increase in the new monthly figure. 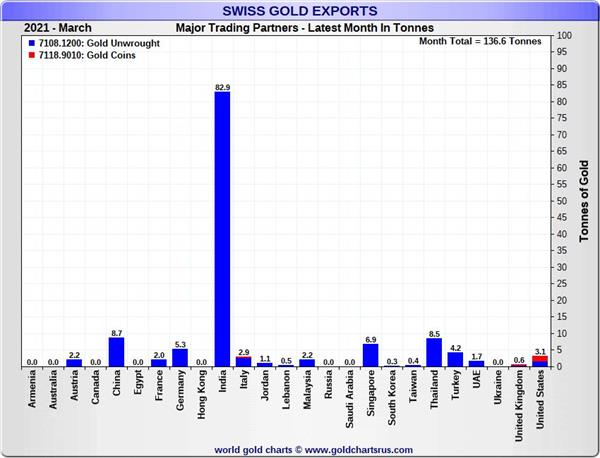 A graphical country-by country overview of the Swiss gold export figures for March is set out above, courtesy of Nick Laird’s www.goldchartsrus.com service, received on this occasion via Ed Steer’s Gold and Silver Digest.  This shows the diverse distribution of Switzerland’s gold exports around the world and the dominance of Asian nations as recipients.  It is truly a window on global gold bullion demand and the seemingly ever-continuing flow of gold from West to perhaps more secure hands in the East.