We have commented here before on the strange reversal of gold flows in and out of Switzerland so far this year, where the main sources of supply have been countries which would normally be recipients of Swiss exports of re-refined and re-sized gold products (mostly small bars and coins).  Conversely some of the normal major suppliers of gold to Switzerland for re-refining and re-distribution have become the major recipients of Swiss gold exports.  We had speculated that perhaps one of the reasons had been the huge needs earlier in the year for supplying gold to the big gold-backed ETFs, but the ETF inflows have diminished sharply since the end of the second quarter and these contrary gold flows are continuing – and even getting bigger.

Take the chart below for Swiss gold exports for the month of August from Nick Laird’s excellent www.goldchartsrus.com service:

While the chart shows the continuation of gold exports to the world’s principal consuming nations – China plus Hong Kong and India as one would expect, more than half was destined for the United Kingdom which has traditionally been itself an exporter of gold to Switzerland of London Good Delivery gold bars for re-refining and re-sizing into the small bar sizes in demand from Asia.  Much of the major ETFs’ gold – notably that of the SPDR gold ETF (GLD), the biggest of them all - is vaulted in London, but in August GLD’s gold holdings actually fell by 8.6 tonnes, yet Swiss gold exports to the UK came in at 84.6 tonnes over the month.  This was even higher than the 65 tonnes of gold exports to the UK in June (when GLD was riding high) and 78.7 tonnes in July.

We had heard that inventories of unallocated gold in London’s gold vaults had been getting extremely low – indeed one analyst had even come up with research data suggesting they had moved into the negative, largely because of the necessity to supply unallocated gold into the ETFs which had been so strong in the first half of the year.  It could be that the latest Swiss gold export figures to the UK are an attempt to rectify this situation – if indeed it exists.  But again this is speculation.

But where is Switzerland importing its gold from.  That is the other side of the curious equation.  The biggest sources of this gold are nations/states which traditionally are importers of Swiss gold – namely the United Aran Emirates and Hong Kong.  See the imports chart below from www.goldchartsrus.com : 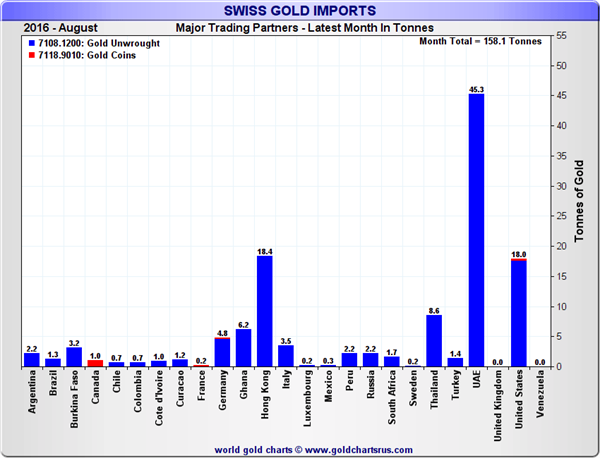 As expected many of the countries exporting gold to Switzerland that month were gold mining countries, but the UAE and Hong Kong figures stand out.  Other nations usually seen as fabricators are also represented in the list – notably Thailand and Italy.  Those following central bank data will perhaps be relieved to see that Venezuela apparently did not ship any gold to the BIS in Switzerland during the month, after being a heavy exporter in earlier months.

The USA, the world’s fourth largest producer of gold, also showed strongly in the Swiss import figures for August after appearing as a significant export destination in the two previous months, which had attracted considerable comment as to why that should be from US commentators!

Our comment on these overall gold imports – notably from the UAE and Hong Kong – we have put down to the overall slippage of gold demand outside the West so far this year prompting traders, who may have built up large inventories in anticipating better markets, taking advantage of the higher gold price so far this year and liquidating some of these at a decent profit.  Our views on that are unchanged.