If there’s any one thing which demonstrates that gold is currently in high favour as an investment class, it has been the global rise in investment into gold-backed ETFs.  These are now comfortably at an all-time high in terms of volume as is shown in the graphic below taken from the latest week’s Gold Monitor published by Canada’s Murenbeeld and Company.  The Gold Monitor, as we’ve noted before, offers some of the best rational (i.e. not over-hyped) analysis of global economics and precious metals out there.  Martin Murenbeeld is one of the most respected gold and economic analysts, but even he will have been taken completely by surprise by the rise and rise of the impact of the Covid-19 coronavirus on the global economy and its perhaps rather belated impact on precious metals.  It is proving far more deadly than those who initially wrote it off as a more virulent ‘flu epidemic, the U.S. President among them, ever realised.

The graphic below was up to date as of April 9th, immediately ahead of the Easter weekend and one can see from it the recent surges in deposits into the global gold ETF sector.  Once these gold ETFs were dominated by the SPDR Gold Shares ETF (GLD) in the U.S., still the largest of all, but this is currently well below its peak gold holding by volume so the big surge in gold ETF investment has been outside the U.S. – mostly in Europe,  With the U.S. equity market particularly volatile at the moment, it is also notable that GLD inflows too have also been positive over the past few weeks.  Once the realisation sets in that Covid-19 is surely dragging the U.S. economy into a major recession, if not a depression. then we suspect that GLD too will match its all time highs within the next few months as the ETF gold deposits rise along with the likely increase in the gold price. 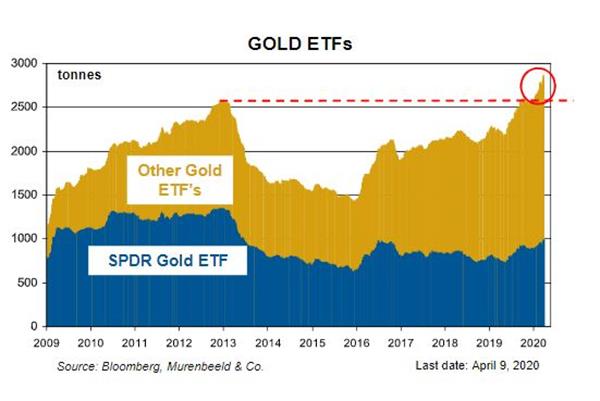 Indeed the U.S. equity markets have been somewhat carried away by the massive stimuli injected into the U.S. economy by the Administration and the Federal Reserve.  That they mostly rose (just) on a day when U.S. unemployment hovered just under 17 million, and rising, and ahead of a weekend where U.S. coronavirus cases have topped half a million and deaths 20,000, and New York has had to implement mass grave burials to deal with the ever-growing mortality numbers, strikes us as irrational. To us the apparent recent recovery in U.S. equities is market madness.  The U.S. coronavirus impact could yet get worse before it gets better which means any return to any kind of normality is still probably weeks, if not months, away.  It is perhaps encouraging that virus cases and deaths in the U.S. virus epicentre, New York, may have peaked over the weekend, but the incidence in other major population centres may yet grow.

In Europe too things may also still be escalating although there are signs of improvement in the worst affected nations.  In Spain and Italy – the No. 2 and 3 nations in the virus incidence table after the U.S. - virus cases do seem to be peaking, while Germany (No.5) – does appear to have been controlling numbers well.  But France (No.4) and the U.K. (No.6) are both still giving major cause for concern.  Indeed the U.K. could be on track to at least match Italy and Spain’s numbers given it has a larger population, although still has a long way to go to do so.

Globally the known Covid-19 infections are closing in on the 2 million mark, and deaths have comfortably topped 100,000, although the figures may in reality be far higher.  Home deaths and virus fatalities in care homes often seem to be unrecorded in the official figures. And anecdotal evidence suggests that the Chinese official infection and death figures in particular have also been massively under-reported.  There is also growing suspicion that the initial infection came from an accidental release from the Wuhan Level 4 Institute of Virology Laboratory where coronaviruses have been being studied and enhanced – a theory supported by reports that the Chinese authorities are censoring and deleting any domestic research into the true origins of the virus.  This possible initiation point of the virus is, of course, strongly denied by the Chinese – but the suspicion lingers.

President Trump is correct in that to stave off a prolonged economic recession/depression he needs to get America back to work, but that is virtually impossible for now without unleashing a second wave virus spread.  The U.S. acted way too late in taking the measures needed to bring the virus under control.  It is somewhat ironic that the U.S. President now wants to take credit for banning flights from China early on, and then, in effect, later shutting America’s borders to all foreign travellers.  Now, with the U.S. far and away ahead of all other nations in virus incidence and deaths, even if the virus diminishes everywhere else, the boot is likely to be on the other foot with all travel from the U.S. likely to be banned by other nations even if, or when, the world’s borders do begin to re-open.

As for the gold price, it is at an all-time high, or thereabouts, in nearly all world currencies apart from the U.S. dollar.  The dollar had strengthened against the vast majority of world currencies over the past few months and years, although in the most recent couple of days the dollar index has been in a slight decline due to the massive amount of money the U.S. doesn’t actually have being pumped into the economy leading to ever-accelerating national debt levels.  Normally this kind of monetary largesse would lead to severe inflation – hyperinflation indeed - but the Fed expects inflation to stay low.  Even so we anticipate the dollar falling further against gold (i.e. the gold price rising off and on until the virus emergency is behind us and the global economy gets back on to a growth footing). But a return to economic growth is not likely to be until the second half of the year, if then.

Optimists, like President Trump, who has a Presidential nomination to secure, are predicting that the U.S. economy will bounce back stronger than ever in the second half of 2020.  We think not.  The decimation of some of America’s biggest corporations will be far too deep-rooted for them to see a rapid recovery.  Indeed some may not survive at all.  While the massive debt build-ups in North America and elsewhere will have ramifications for the global economy that may not be overcome for several years – if ever.  The world is changing in a way that no-one could have anticipated only three or four months ago.  There will be winners and losers, and at this point in time it looks like the Asian nations, particularly China, which appear to have handled the virus impact on their domestic economies rather better than Western nations, may come out of this with the upper hand economically in global terms.

On investment to see one through the days ahead, gold and gold stocks look to be the best bets.  Silver may be dragged up by gold as, to a lesser extent, may be platinum but we continue to be very wary about palladium which is almost wholly an industrial metal with its main demand in the auto sector which has been decimated by virus lockdowns.  We see gold as far less vulnerable to a price collapse than equities, although it could still be adversely temporarily affected by liquidity issues.  However, once these are out of the system, it could well be set for a strong bull run which could easily take it up to $1,800 in the second half of the year and on to new U.S. dollar highs thereafter.

Gold mining stocks offer leverage over and above the gold price but, as always, mining offers risks not associated with bullion, so one needs to do one’s due diligence before any mining company equity investment.  Gold ETFs look to be a simple way of investing in gold, although mega-investor Jeffrey Gundlach has issued some words of warning on gold ETF investment – see: Gundlach Warns Stay Away From Gold ETFs: "What Happens If Everyone Wants Delivery".  We think this is a bit of a spurious argument, though, particularly if one restricts one’s investment into a fully gold-backed ETF like GLD.

We re-iterate our warnings about silver- the ‘devil’s metal’ or ‘gold on steroids’ depending on one’s point of view.  In theory, on past performance, it should outdo gold in percentage terms within a gold bull market, with the gold:silver ratio coming back a few points..  But given its recent out of favour performance vis-a-vis gold we are not overly confident of this.  However the price is low enough to limit the downside risks so it will probably rise along with gold, but perhaps not meet its historic ‘on steroids’ rating.