By our reckoning, Turkey has imported some 174 tonnes of gold in the first half of the current year.  This reflects a degree of political turmoil both before and after the April referendum, which gave President Erdogan sweeping additional powers, but also Erdogan’s advice late last year that citizens should buy gold or Turkish lira rather than dollars in converting foreign currency or as a hedge against future uncertainties.  It looks as though his advice has been well heeded as far as gold is concerned.

This year’s imports to date have already exceeded the 106 tonnes imported in full year 2016, which in turn was more than double the amount imported in 2015.  Thus this year’s figures represent an enormous increase on prior years’ figures and probably puts Turkey currently in place as the world’s third largest net importer of gold, after China and India.  Turkey’s month by month gold imports for the past five years are shown in the chart below from www.goldchartsrus.com . 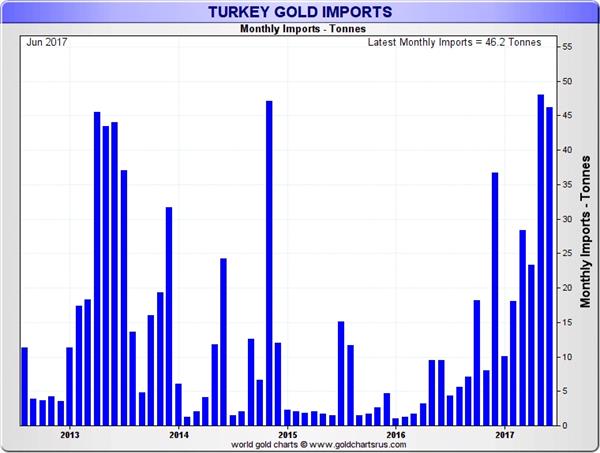 While Turkey is a significant consumer of gold in its own right it has also acted as a conduit for gold going into nations like Iran where economic sanctions have restricted direct imports in the past.  The nation is also currently embroiled in the Qatar crisis which could bring it into direct conflict with another Middle Eastern powerhouse – Saudi Arabia – and it is hugely critical of U.S. support for Kurdish forces helping the latter in the fight against Islamic State.  It sees the strengthening of the Kurdish militias as a major threat to the region as the Kurds have an agenda to create a Kurdish state which would incorporate ethnic Kurdish areas of Turkey, Syria and Iraq.

With Chinese gold demand remaining reasonably strong and Indian demand hugely up in the first half of the year ahead of the new GST imposition, gold flows from the West to the Middle East and South and East Asia have been very strong in the first half of the year and have probably accounted for just about all of the world’s new mined gold, which puts physical metal in short supply in the west.  Gold continues to be taken out of the world’s largest gold ETF, GLD in the U.S., but it looks as though this has immediately moved eastwards and has so far had little impact on the gold price.

Analysts are awaiting any signals which may come out of this month’s U.S. Fed meeting which takes place over the next 2 days.  While this is not expected to recommend a further interest rate increase, the minutes of the deliberations will be pored over for signals of the Fed’s current thinking on rate rises and balance sheet reductions.