With the release of the latest gold import and export figures, the UK demonstrated its importance as a key middle player in global gold trade.  While imports of 55.2 tonnes in March (around 21% of world new mined gold output) showed few surprises being largely sourced from major producing nations.  The USA, the world’s fourth largest gold producer, accounted for over 40% of the country’s gold imports, while Canada (the World No. 5 nowadays) provided 27.5%.  The world’s Nos. 2 and 3 gold miners – Australia and Russia – do not trade much, if any, gold through the UK – the former for geographical reasons and the latter because it takes most of its newly mined gold into its own gold reserves.

But the export distribution is perhaps more interesting.  In March the U.K. exported around 10 more tonnes of gold than it imported.  Unsurprisingly the lion’s share (just under half) was to Switzerland where the refiners specialise in re-refining London good delivery gold bars into the smaller, and slightly higher tenor, bars and wafers in demand in the world’s largest markets in Asia.  Perhaps more interesting however in terms of global gold trade was the export of 16.1 tonnes (24.6%) direct to mainland China (and only 0.5 tonnes to Hong Kong).  As we have often pointed out the known gold exports to mainland China (mostly from Hong Kong and Switzerland) tend to be comfortably in excess of the figures assessed by the major precious metals consultancies as Chinese consumption, and the high UK export figure, although well below the amounts from Switzerland and Hong Kong, serves to emphasise this point.  The March gold export figures from the U.K. are neatly set out in the bar chart below from Nick Laird’s excellent www.goldchartsrus.com service. 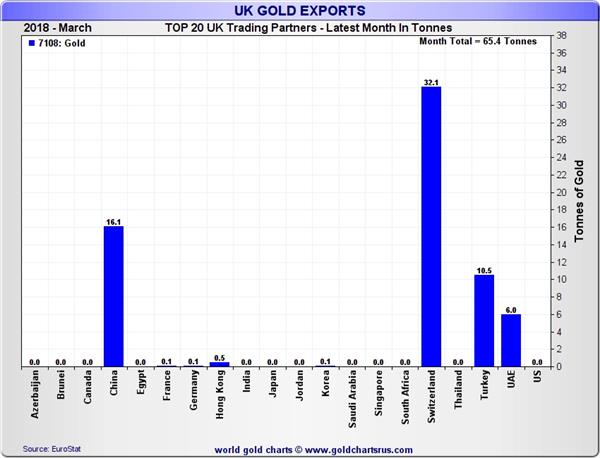 The other points of particular interest in the U.K.’s gold export figures for March are the relatively high numbers for Turkey (16%) and the United Arab Emirates (9%).  Turkey in particular is playing a dangerous geopolitical game in respect of its relationships with Russia and the U.S. and its military incursions into Syria where it has been targeting Kurdish held areas close to the Turkish border.  The Kurdish militias have been strong supporters of the U.S. drive against ISIL and the Turkish actions may not be seen as a positive development by the U.S.

Indeed it is now reported that Turkey has been repatriating its gold held in the U.S. which could be a sign of increasing tensions between the nations as Turkey perhaps allies itself closer with Russia.  The repatriation has been reported as due to increased geopolitical tensions involving the nation.  Turkey’s President Erdogan has also signalled reduced dependence on the dollar in its reserves and has advocated that international loans should be designated in gold rather than dollars.

According to IMF figures, Turkey is the world’s 11th largest holder of gold in its forex reserves.