London and the UK remains at the centre of the world’s gold trade – at least for now.  Primarily it imports newly produced gold from a number of primary gold producers and then either holds it in vaults, or ships much of it to Switzerland for re-refining and onward delivery to the world’s primary consumer markets.  But interestingly the latest gold export figures out of the UK show an export proportion directly to mainland China which, perhaps, is a counter to comparatively weak February export figures for Switzerland into China.  Charts showing UK gold imports and exports for February from Nick Laird’s www.goldchartsrus.com service are shown below: 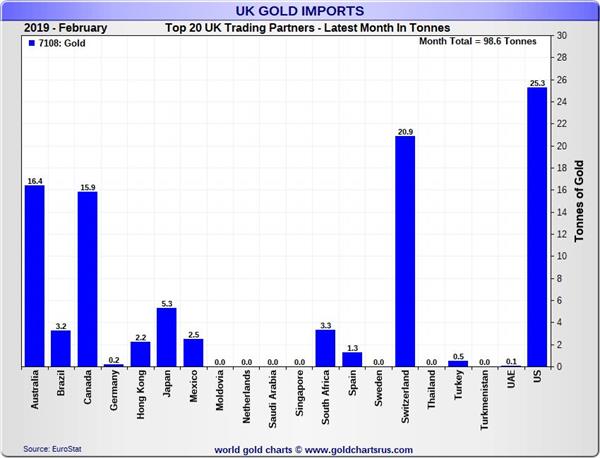 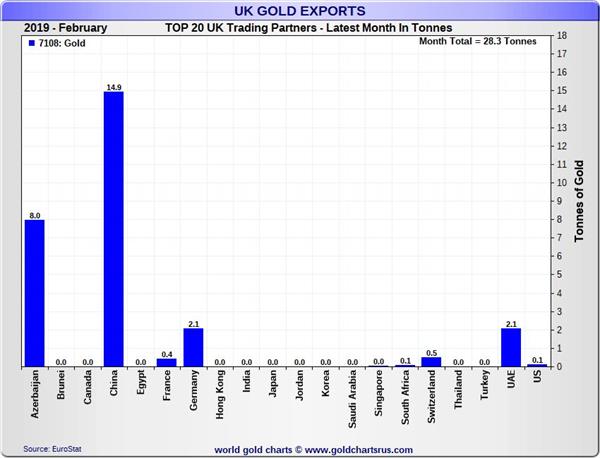 Regarding the gold import figures there are few surprises.  Most of the major sources of the gold imports are significant gold mining nations or from countries like Switzerland, Japan and Hong Kong which have largish internal gold trading markets.

The major anomalies, though, come in the UK’s gold export figures for February, although the overall figure is quite low (well below the import figure) but this could relate to accounting periods and shipment dates.  Nonetheless the biggest destination for UK gold exports that month was mainland China which took in 14.9 tonnes.  That might be seen as surprising, but ties in with Chinese gold import figures overall and also with relatively high Shanghai Gold Exchange gold withdrawal figures in March.

Perhaps an even bigger surprise though was the volume of gold exports to tiny Azerbaijan.  While exports of 8 tonnes may not be particularly significant in a global context, in the case of Azerbaijan it is a HUGE amount and could signify a big reboot for that country’s gold reserves.  In recent years  Azerbaijan has reported gold reserves of zero tonnes to the IMF, but does have a past history of holding gold.  Back in 2016 it reportedly held 30.2 tonnes of gold but appears to have liquidated all these by 2017.  Maybe the imports from the UK mean that the Azerbaijani central bank may have turned back to holding some gold in its forex reserve holdings, particularly as it is technically within the Russian sphere of influence and Russia has been the biggest expander of gold reserves over the past several years.

Azerbaijan’s biggest export is oil, but it is also a small gold producer with latest production estimates of around 6 tonnes a year (mostly produced by UK registered and AIM-quoted Anglo Asian Mining PLC and state-owned Azergold) – a significant amount in relation to the country’s oil dominated GDP of around 40 billion US dollars.  It is believed that this gold is exported, primarily to Russia, but some could be going into forex reserves but that won’t be known unless, or until, the country reports its gold holdings to the IMF.