LAWRIE WILLIAMS: What happens to gold in a global equities crash?

Global equity markets are, to say the least, nervous.  Are the recent downturns precursors of the much-predicted market crash?  And if they are what will likely happen to precious metals should they do so?

We only have to go back to 2008 for a guide and if that pattern is repeated then short term prospects for precious metals are far from positive in an equities meltdown, although medium to longer term price movements are likely rather more encouraging.

In the 2008 market crash gold fell back in line with equities, although not quite as far nor as fast, as investors struggled for liquidity and had to sell the good with the bad to stay afloat.  In effect there was a ‘fire sale’ in precious metals and investors who had the wherewithal, and the nous and courage, to climb in at the time will have done enormously well over the following two to three year period.  Gold recovered far more quickly than equities and had regained its losses within 2-3 months while equities took very considerably longer.  Gold reached new record levels within 3 years before the powers that be decided enough was enough and brought it back down to earth, but even then it remained considerably higher than it was ahead of the market crash.

Silver fared rather worse than gold at the time, almost halving in price, but recovered almost equally quickly hitting a peak near $50 an ounce also within three years and made these gains more rapidly than gold after a relatively slow start, but again was brought back down to earth sharply in what some believe to have been a trial run for the gold price knockdown a few months later.  Both major precious metals have performed mostly disappointingly ever since, although silver has tended to fare worse than gold.  The two 10 year charts from www.kitco.com reproduced below show the patterns well. 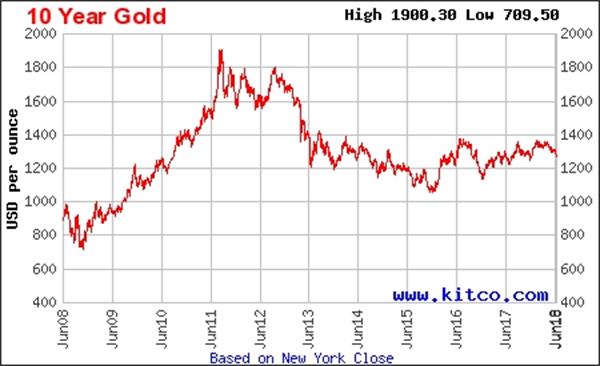 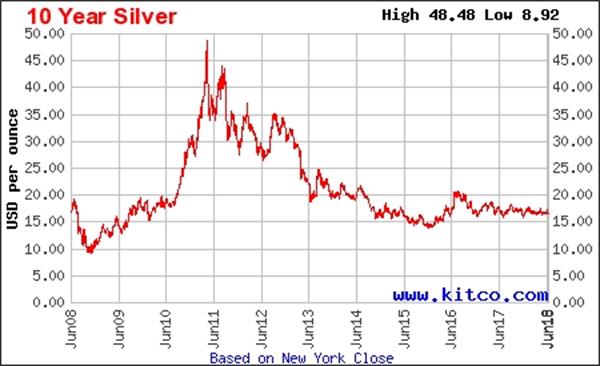 But, and it’s potentially s big but, if the crash predictors are correct, any forthcoming equities meltdown could be on a much more severe scale than in 2008.  What then for precious metals?

We suspect a similar pattern to 2008 could emerge, but the price downturns in gold and silver could be even more severe, and the recoveries rather slower, but they would still almost certainly be far better places to be than equities.

For the potential investor in precious metals it may thus be a good plan to try and pre-judge the likely path of the equity markets.  They do seem as though they may be in bubble territory and if so it could be worth waiting to see if a meltdown is forthcoming.  If it does occur then it might well provide great precious metals buying opportunities.  And it’s probably best to avoid bitcoin, which had a good run, but subsequently crashed and is finding it hard to recover.  Indeed in our opinion it could yet have much further to fall.

Equity markets are looking volatile at the moment, searching for direction, while the dollar may have seen the best of its recent gains.  We would anticipate gold gradually clawing its way up through $1,300 and silver through $17 again, but there are potential geopolitical factors out there which could accelerate this process.  The U.S. Fed looks set on further interest rate rises this year, which should be a negative, but this has largely been discounted by the markets, and some poor U.S. data or a perceived equities crash could make it rethink – perhaps unlikely at the moment but the potential Trump trade war with foes and allies alike has to be unsettling for the markets and could prove to be the trigger which unleashes what many perceive to be an inevitable massive global economic downturn.  Forewarned is forearmed!