LAWRIE WILLIAMS: Will she, won’t she?  Gold poised but which way will it move?

Gold was allowed to end the past week at a little north of $1,800, and silver above $26, after a few shaky moments which saw all the precious metals fall back a few dollars.  The big question now is, of course, can the new levels be maintained, or even built on, in a continuingly volatile marketplace?

As we had suggested in another recent article: Views on gold somewhat mixed.  We remain bullish, we suspect that gold may be finding its base.  It could thus be preparing for the next upwards move which should take it back to $1,900, and possibly higher over the remainder of the northern summer holiday period, although we now feel that $2,000 gold may yet be out of reach in this year’s trading and certainly we have never advised readers to follow those predicting a $5,000, or even $10,000, gold price.  Yes, gold may indeed reach these exalted levels at recent growth rates many years hence, at which point these pundits will be quick to say ‘I told you so’, while conveniently forgetting they’ve been preaching the exalted gold price mantra for more years than the average gold investor will be able to remember.

‘Be careful what you wish for’ is a time honoured saying.  Should the gold price indeed rise to the kinds of levels these gold ultra-bulls are predicting it would be because of a total collapse in the global economic system, or an all-encompassing military conflict from which no single nation is likely to emerge unscathed, or victorious..  The resulting chaos would probably bring about the kinds of apocalyptic scenarios so beloved of the Hollywood disaster movie genre.

Our approach to gold has tended to be cautiously bullish, so if we take advice we tend to take it from those of a somewhat similar inclination.  We have recommended Canadian consultancy, Murenbeeld & Co, in these pages beforehand and have no hesitation in so doing again.  Martin Murenbeeld, who founded the consultancy which bears his name, has been one of the most accurate gold price forecasters of recent years.  He takes a statistical approach to his forecasts, which he adjusts on the basis of most recent price trends.  So saying his forecasts made at the beginning of the year he now feels were over-bullish and he has scaled these back accordingly.

Murenbeeld  puts forward three likely price scenarios – a cautious one, a bullish one and a ‘most likely’ one and attaches a likelihood weighting to each scenario from which he comes up with an overall price prediction.  His latest forecasts, issued last week, are set out below: 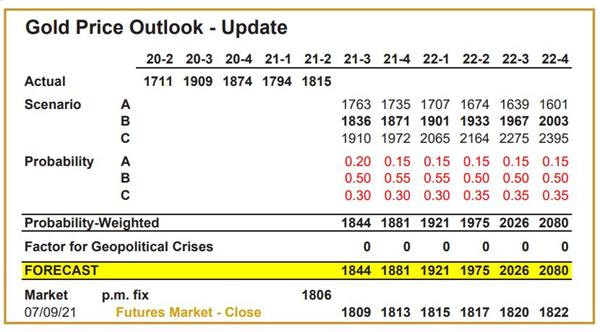 It should be noted that these forecasts are for average prices over each quarterly period, so the daily spot prices during these individual quarters could be considerably higher or lower, so do not rule out totally a near-$2,000 spot price occurring before the end of the year, although on his latest predictionas this seems perhaps unlikely.

In the consultancy’s own words as published in its latest Gold Monitor weekly newsletter for clients:  “Scenario A essentially sees gold returning to its levels at the time Covid hit ($1550-1600); global liquidity dries up, real interest rates turn sharply less negative, and inflation pressures subside. Scenario C is modelled on real interest rates remaining deeply negative, global liquidity rising significantly further, inflation remaining seriously elevated, and the dollar tumbling some 8-10% over the course of the next six quarters. (We think Scenario C has a higher probability than Scenario A, as reflected in the probability table.)”

The consultancy goes on to note that in some of its past forecasting scenarios it has tended to add a few dollars for likely geopolitical occurrences which could affect the gold price.  Such additions are lacking from the latest price prediction table, in part because the forecasters are undecided over the likely impact of such factors as China/US economic and trade problems, Russia/US cyber-warfare, the Iran/US nuclear standoff, the upcoming Afghanistan civil war, China encroachment on Taiwan, etc.  As can be seen there are plenty of ‘unknown unknowns’ which could have an impact and if any of these, or others, flare up we could well see some additional price movement.

Our own price view is perhaps a little more optimistic for the gold investor than the Murenbeeld weighted averages, and tends towards his Scenario C more bullish forecast for the reasons stated above.  Murenbeeld notes that the consultancy is overall bullish on gold – as are we.  We hope and think the gold price might progress a little further and faster than the latest Murenbeeld weighted predictions might suggest, but not hugely so.