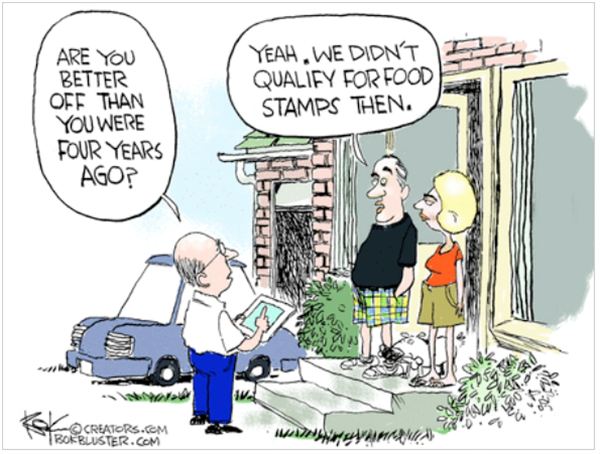 As we approach the end of the quarter, the global economy has set the fertile ground for more growth. Cutting interest rates and extended stimulus has been the prime action taken by several countries – notably in South East Asia. Meanwhile, the American and British central banks are pondering on a possible rate hike. It remains difficult to predict but it is a matter of when and not if.

The Federal Reserve has unanimously chosen not to raise interest rate for a while. Instead, Miss Yellen sounds rather dovish after her remark at the strong US dollar. A healthy correction on the dollar is underway while we reckon this is only temporary at best. There were various discussions about the strong dollar which affect the equity market. Any plans for a rate hike look set to delay until June or September period. Further evidence of better than expected economic data will drive the need to raise interest rate.

Mark Carney and the BOE have a lot to juggle as they look to inflate the British economy in the 2nd quarter of 2015. Interest rate is already very low; inflation at zero and with austerity plan set by the current government, Britain may need to embrace deflation for a short while. Anymore cut in the interest rate has been ruled out and other policies may be in place to kick start the economy again.

Finally, there is some light at the end of the long tunnel for Greece. Some aid money will be release for the Tsipras government to pay their creditors after reforms were agreed with Miss Merkel.

Bullish engulfing candlestick stood out from last week commentary. Hedge funds are busy unwinding their short positions for profit and the bears ease off the selling pedal. Obviously the US dollar correction play a significant part; allowing gold prices to rocket higher with resistance at 1205, 1225 and 1244 respectively from the Fibonacci retracement line January 2015 high. Our shorts were stopped out in a momentary flash after the Yemen bombing or shall we say one big whale unwinding short to shock and awe the market. Our argument remains bearish since we see a stronger dollar which will continue to drive the market. 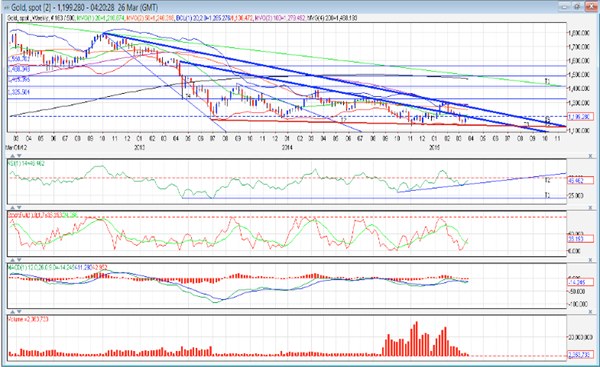 Silver posted a very good rebound after failing to break previous low. A double bottom is in for now and the monthly chart (see below) showed that support was found from the long term trend line (shaded thick blue). We cannot discount the fact that silver prices may already bottomed here or could be in another glut to test below again before a strong reversal (potentially creating triple bottom). Despite that, we are unsure on the next catalyst to warrant higher silver prices – so caution is recommended before we take any more trades. Short term paints a bullish picture for silver prices to test higher prices. 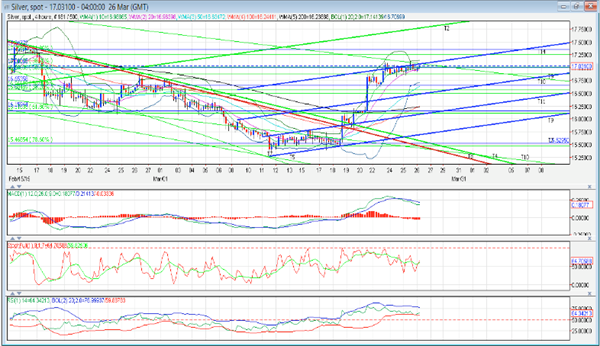 4 Hour Chart – Other indicator suggest a small pullback after a good rally but silver prices often fall faster than rises. 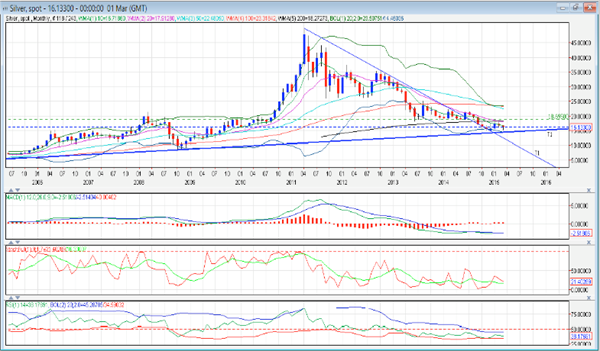 Monthly Chart – Watching the long term trend line acting as support for now at $ 14.65 and rising. Could Silver kick start another rally from this trend line?

Our short position once again failed to materialise as Platinum did break lower but found support at 1132.20 and then resume higher on weaker US dollar and strong equity market. Potentially, 1132.20 is the last line of defence which could lead to lower prices. On the short term, prices may look bullish and we are cautiously looking to short at 1191.50 if allowed. Otherwise, a break below 1132.20 will give us the green light to punt for a short. 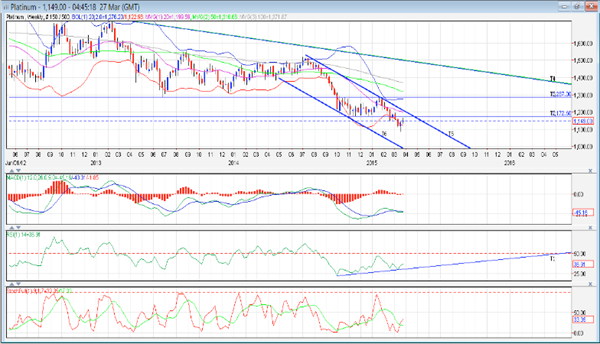 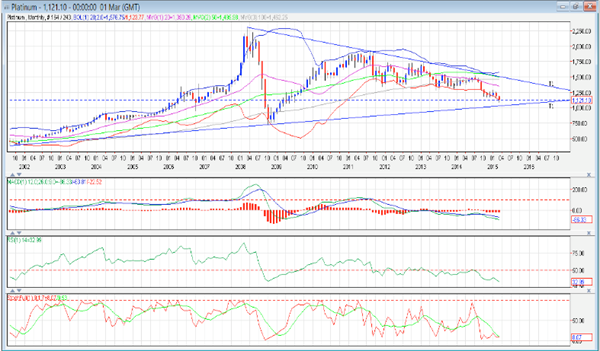 Monthly Chart – Potential setup for a period of short covering but aware that upside remains capped.

Our previous short position was never triggered. Prices did move in a range of 781 – 759 = 22 points up and down. Upper range of the 4 hour chart Bollinger Band 775 could be the target while the lower band at 759 is also a potential target. We expect further consolidation BUT upside remains capped and favoured the downside. 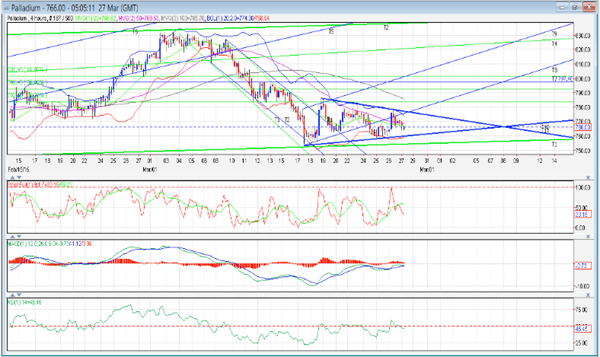 4 hr Chart – Prices continue to range trade in this ascending triangle – a break out of this range could determine the next move. 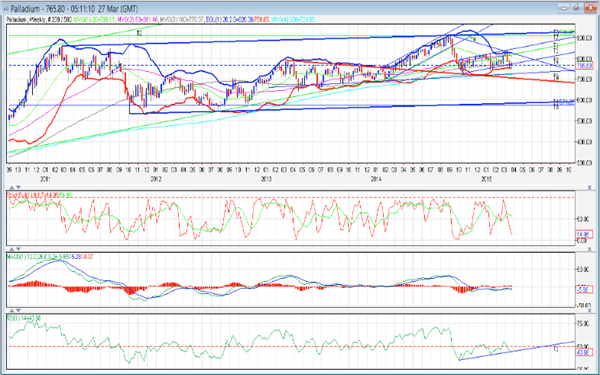