Last Friday, we witnesses Eurozone unemployment rate that came in better than expected and stood at 11.7%. Many Euro sceptics think that the rate is still rather high and unsustainable. Final manufacturing PMI also show some sign of improvement despite the fact it is still below 50 which suggest contraction. Over the weekend, PM Rajoy credibility is questioned over a possible corruption scandal. This is followed by the on-going MPS investigation in Italy when the world oldest bank overpaid in a 9 billion euro purchase of rival Antonveneta in 2007.

US non-farm payroll is at 157k, short of market expectation but revision for previous payroll data show a sign that the US economy is creating more jobs. US stocks open higher as they see a positive data on employment while gold investors see this as a continuous QE policy since unemployment rate increases.

This week, we have interest rate decision from the UK and EURO. Market expects Mr. Draghi to cut interest rate since his previous comments indicate such possibility. Friday, all eyes will on Chinese year on year CPI numbers to digest.

Short Term:
This morning, gold in Yen terms traded much higher on the back of the weaker Japanese Yen. Market opened with small buying interest from Asia and managed to push prices up to $ 1673 before giving back its gain and at the moment consolidating. We mentioned in our last commentary that prices will be volatile till the end of last week and we expect prices to trade in a range of $ 1660 to $ 1690. Initially, the gold price moved higher post non-farm payroll data as market see higher unemployment rate as the indicator of continuous QE by the Fed. However, investors remain unconvinced about the short term rally and those rallies were eventually sold on the back of a more positive ISM manufacturing index number.

Medium Term:
Gold has support at previous low of $ 1652 and January low at $ 1625. We remain neutral bearish at this moment and would stay on the side line. Bullish sentiment will prevail once we crossed the resistance level of $ 1686 and January high of $ 1697. In a note, Deutsche bank reminded us again that gold lacks a convincing catalyst in the near term to take it meaningfully higher and instead remains susceptible to opportunistic selling. 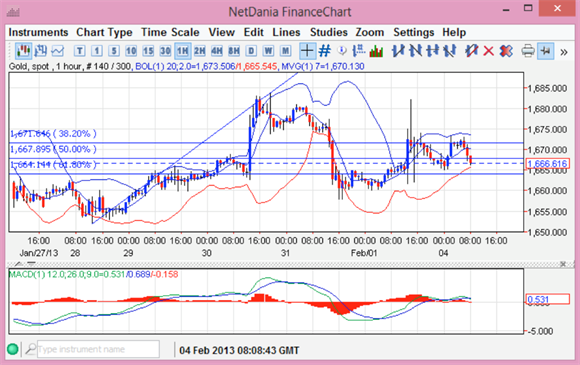 Short Term:
The market opens with silver consolidating from last week positive momentum. Silver prices reacted more positively compared to gold as it moved higher and managed to hold on to most of its gain despite failing to overcome the high made on the 30th January at $ 32.27. We noted that silver has an upside momentum and support are strong at $ 31.00 level. At the current stage, investors are still range trading between $ 31.00 to $ 32.00 areas. We will be more bullish should prices break resistance at $ 32.47.

Medium Term:
We are at best neutral bullish on silver and will look to buy should the price manage to hold on well above $ 32.00 level. At the moment, prices are holding up well above the $31.23 - 38.2% retracement level basis on January (high and low retracement level). In addition, it is above the 21 day moving average of 31.28 that may give good support in the short term. 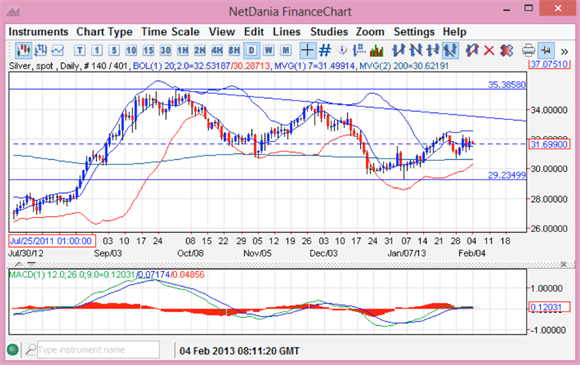