ROSS NORMAN : GOLD - For Whom The Bell Tolls

There is probably no more irritating an adage than the old Wall Street one which says “no one rings a bell at the bottom or top of a market” … but it does highlight the purpose or value of making a trading call - or if you prefer (as it is the season for it) … in making a forecast.

No one wants to be too early in calling a bottom in gold as your career would then be aligned with those slightly unhinged permabulls that have been calling for a massive move up in gold year after year - and been permawrong. Nor do you want to be too late - because that would make you, well plain dull.

So, let me try and define a “ding dong” moment for you. When can we say that gold is quite definitively in a bull run… ?

Firstly, let’s just accept that gold does go into very extended periods of hibernation and these can be very lengthy - who can forget the 19 year stretch between 1980 and 1999 with prices and volatility eroding together ? And the seven-year period from the all-time high in September 2011 has been no less painful, with gold variously described in the media as ‘unloved’ at best, or ‘disdained’ at worst. It’s kind of hard to shake off the winter or the sense that anything resembling a recovery is anything other than a temporary retracement … then fooled again. Whilst the bright start to the year has been encouraging, we aren’t hearing any bells just yet. Asset allocators often tend to throw a pile at assets like gold in January, before moving onto other things - and gold flat lines again.

In December 2018 Sharps Pixley saw gold price strength in GBP being sold into - this is normal in the early stage of a bull run. Tired investors often take advantage of a price spike to take profit. And then there comes the increase in scrap sales - both fully expecting the price to revert south again. 2019 has started differently for us … we continue to see some good selling but also some large buying coming through. This suggests to us that investors may be starting to see the price strength as being a more semi-permanent thing, just as it was from 2000 to 2011. And buying on price strength would be confirmation to us that sentiment towards gold has seen a seismic shift. And then in come the momentum algos, the self-fuelling good news stories … and off to the races we go with year on year double digit gains. But we are not there yet. Sadly we can only be wise after the event, but its certainly looking very 'constructive'.

Where are we going with this…

Oh yes, what’s the number where we can say that gold has quite definitively broken out - well we would suggest $1360- which would be topping the highs seen early last year and in 2015. See chart below. 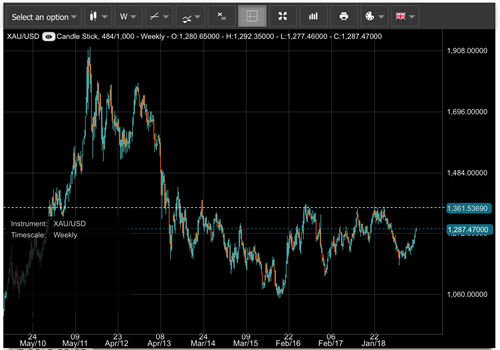 In John Donne’s (1572-1631) sermon (perhaps his name rings a bell ?) he said “Any man's death diminishes me, because I am involved in mankind; and therefore never send to know for whom the bell tolls; it tolls for thee.” In other words, the ringing of the bell is for us all - no man is an island.

Now there’s a gold price forecaster ahead of his time - so at $1360 we should be all in.