Gold is poised to crack the critically important $1291 level which is a trendline going to back to the all time high on September 22nd 2011 when gold hit $1922 an ounce.

Conclusively breaching this trendline is to say we are very much back in a bull run. With $1291 breached there would only be the minor inconvenience of the psychologically important $1300 level - more of a speed bump than a real resistance level - before gold is able to move move higher largely unfettered. See chart below.

Since 2000 gold has notched up an average of a 11% year-on-year gain compounded - that is four times a UK property, double a London property and three times what the Dow Jones Index has achieved. And yet it remains a minority sport ... arguably the best kept secret in financial markets (we are less than 0.5% of global assets under managment).

2017 looks likely to achieve well north of the run rate of 11% and Sharps Pixley has forecasted an average for the year at $1310 ... a 15% gain ... and we may well have under-estimated the potential. With the Relative Strength Indicator at only 65, there is still plenty of scope for buying in gold before we achieve "overbought" status. Going into a long weekend and with legions of potential black swans out there, this is no time to be short gold and we would not be surprised to see short-covering later today.

Looking at the chart below it is clear that gold is still only roughly where it would have been WITHOUT the economic crisis. The bull run between 2000 and 2008 was based upon sound supply/demand fundamentals - and of course costs have risen commensurately ... in short, at current levels and bearing in mind the outlook for inflation and certainty of ongoing geopolitical uncertainty, the current gold price is an absolute steal !

Having recently returned from the Dubai Precious Metals Conference, the mood there was also buoyant despite a proposed 5% duty on jewellery.  Uppermost in the minds of those attending is the potential impact of Shariah Law and investments in physical gold. This is a $2.2 trillion market which is growing fast - a mere 1% allocation to gold would see 500 tonnes bought (as much as total net Central Banking buying each year) - and 6% allocation would require them to buy 100% of global gold mine production. 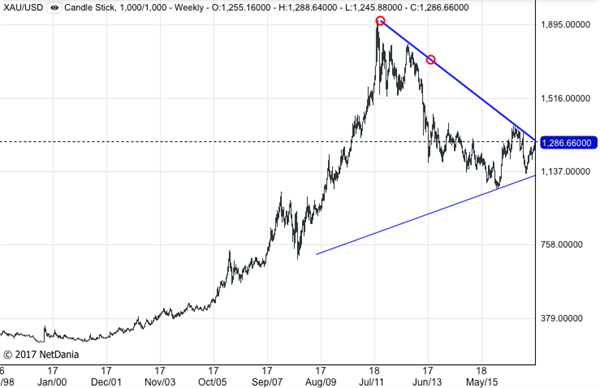 Meanwhile, the debt ceiling looms and with it the possibility of a government lock down in the US. The total US gold reserves are about 8045 tonnes - if you denominated the current debt in gold then the US owes 450,000 tonnes - about 3 times all the gold produced in history.

Like most forms of insurance ... it is best bought well before you think you need it ... and that time just might be coming now.