What happens when an unstoppable force meets an immovable object ? The paradox is not meant for philosophic debate, but an intro to possibly explain the current gold price (in)action... and by extension, where it might be headed.

Gold saw a stellar rise in H1 2016 and has since tracked sideways, with price volatility falling to a two year low. It would be easy to blame the lacklustre price action upon economic policy uncertainty and what is increasingly looking like two increasingly divergent narratives about the course the economy is taking. We think there is a stalemate in play.

To get a view on the price outlook for the balance of 2016 one needs to consider who the protagonists involved in this stand-off are and how they are likely to behave.

The first point to make is that 2016 has been an epic year in terms of the scale and speed of the reverse flow of bullion. Chinese and Indian demand coupled with Central Bank buying dominated the demand-side over the previous 5 years but has slowed to a trickle, while the erstwhile sellers - the West - have turned buyers. Metal that had been flowing from Western central bank selling, institutional sales of ETFs and even cash-for-gold at a retail level through the Swiss refineries is now flooding back into the West.

Switzerland is the nexus for gold flows because of the large number of refineries operating there - and they convert the metal from a purity the Asians want (typically 99.99% purity and kilobar size) from the Western standard (typically 99.5% purity and 12.5 kg bars) - happily they also have reliable import-export data to aid market intelligence.

It would be tempting to imagine that all buying is equal - not so - some is "stickier" than others and herein lies the key issue.

The new Western buying has come from two key sources - about 500 tonnes of buying in the form of gold futures (OK leveraged paper and not physical) and the purchasing of 580 tonnes of gold ETFs in H1 much of which will have flowed into the nominated vault (usually HSBC London). This buying - as we learnt in 2011 when gold peaked at $1922 - is arguably of a much flakier nature than Asian buying. Futures traders typically hold for far shorter periods of time and are less concerned with market fundamentals. Many are long, sitting on a handsome profit and impatient. They are the 'weak hands' and in that environment it would be easy - and even healthy to see a good bout of profit-taking. 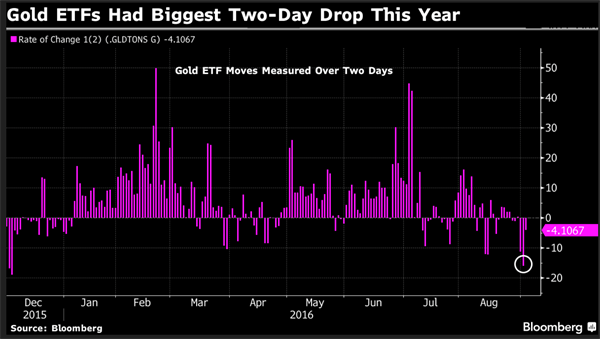 The buyers are the Asians, European investors and Central Banks ; they however are showing a greater level of patience - if the gold price dips they buy, but they are not going to chase it higher. This is a familiar approach that Indian traders would typically adopt but it seems to have extended into China and even the official sector behaviour. As such, we have seen modest price corrections which are often shallow and short-lived, suggesting the market is very well supported. We ourselves have a good number of physical clients here at Sharps Pixley looking to get in - but only at a lower price - we think this is not untypical.

Removing uncertainty over the US elections from this story, we would expect the impasse to continue for a while to come. The COMEX traders have shed about 15% of their positions from the peak and even the ETF buyers have indulged in some profit-taking. There is however quite a sizeable overhang of metal still to be absorbed by the 'real' market before we can expect the new direction to emerge in our view. All good things come to those that wait.