For UK gold investors, the sharply weakening currency is proving a fantastic win for them; gold commenced 2016 at GBP 725.02 per ounce and today was trading at £907.64, netting investors a healthy gain of 25.2 pct in just 5 months. In short, gold provides an easy escape from a declining local currency.

Whilst Sharps Pixley has never advocated taking a short term gold position for tactical wins, for the discerning investor with a long term strategic view, it authenticates the case for owning physical gold and for what it does best - and that is as a long term store of value and an effective means of wealth preservation.

The UK is not unique in seeing its currency weaken and physical gold is an easy way of hedging yourself and providing wealth protection for just such an eventuality. 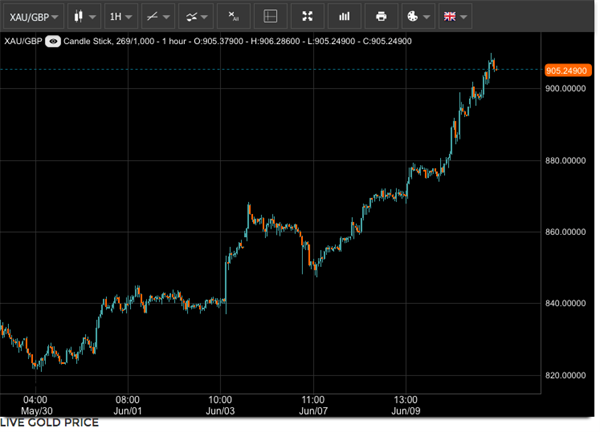 Although some polls are suggesting the leavers are in the lead, the remain camp still very much has the betting odds in their favour (and crucially this is regarded as the best guide), which sees them likely to secure victory with an implied 64.5 pct probability of winning.

With just 10 days to go before the vote it looks likely that the rhetoric on both sides will scale the fear factor and the British pound is likely to weaken and correspondingly gold in sterling terms may be the winner.

In the UK, gold is not everyones cup of tea, and it continues to be a much under-owned asset ; even internationally it could be said to have a minority following representing less than 0.5 pct of all assets under management.

In a world of sophisticated paper assets, we could see a time when hard assets, especially those without counterparty risk, have a renaissance. In the meantime the only thing likely to compete here in London for our attention (other than gold and BREXIT) is our national football team in the Euros. On current performance we may be unlikely to be lifting any silverware soon - but for the rest of us there is clearly another golden opportunity.