Chinese better than expected manufacturing numbers, expanded at the fastest rate in two years. The index rose to 51.9 in January compared to 51.5 in December. Meanwhile, Japan logs a record trade deficit in 2012 according to the Japan Ministry of Finance. Overall exports fell by 5.8% in December from a year earlier due to the on-going island dispute between China as well as a strong Japanese yen for a good part of 2012. It was not all business in Asia as North Korea launch another nuclear threat, this time to target the US.

European market started with a flurry of poor data from the French PMI that was below expectation and Spanish higher unemployment rate at 26.02%. Initially, Euro sell off on the back of the poor data but then regained grounds after a better than expected Germany PMI numbers. Such disparity is a major concern and could well paint a confirmation to IMF’s prediction for the Eurozone in 2013.

Short Term: Gold prices was testing to erode its previous January high of $ 1697 for the 3rd consecutive times but failed and retraced back - initially found support at $ 1683 before heading lower. It then found support at $ 1669 area which was the 38.2% retracement from January low of $ 1625. Analysts deemed this as a bout of technical selling after prices failed to break above the key technical resistance level. We did warn on our last commentary, should gold failed to take out its previous high then a bearish sentiment will set in.

Medium Term: The current support level on gold is at $ 1669, $ 1661 and $ 1653 respectively. At the moment, the chart pattern indicates profit taking as well as weak long hands getting out of the market. Only if the price breaks lower than the 61.8% retracement level at $ 1653, we will be bearish. 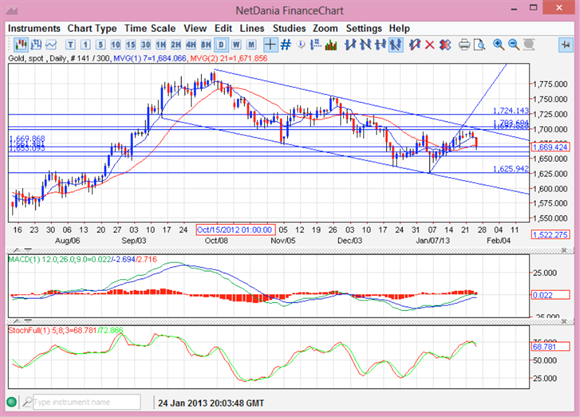 Short Term: Meanwhile, silvers prices rallied to a new January high of 32.50 but unable to sustain the gains. The selling escalates after the Asian trading hours and silver prices found support at the 23.6% retracement level and currently sitting at $ 31.72. Further support is available at 31.60 (previous breakout level), $ 31.23 (38.2% retracement line). As per our last commentary, we locked in our profit at $ 32.05 as failure to hold on to its gain and the $ 32.00 is a major concern.

Medium Term: The chart pattern did not paint a very bullish picture on silver after its attempt on the January high of $ 32.47 level. Profit taking and some long liquidation took place and silver will have to consolidate further. We argued that silver has got the potential to find support and retest to take on its previous high. It may just need a little time to catch its breath. 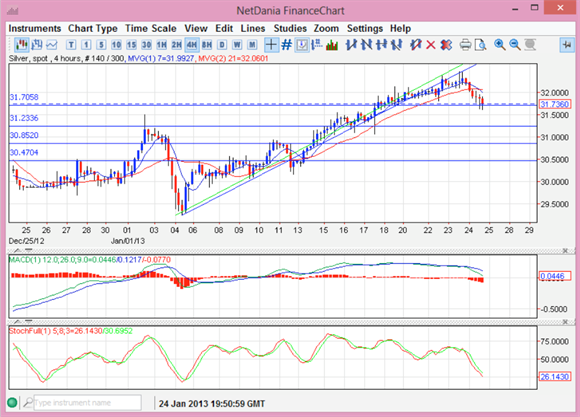