PM Abe continued on his relentless assault on the BOJ and today he repeats his request for the bank to act on the 2% inflation target. In addition, he mentioned that the fiscal spending will not be forever and that once growth and inflation is attained then raising taxes will be viable.

Meanwhile, bond traders are worried that the Fed may cut short QE program as early as the end of 2013 which could indicate a possible rise in interest rate to curb potential rise in inflation. This argument is based on the latest media frenzy that the US economy is on the road to recovery. Such argument is also boosted by a better economic data from the Euro zone as well as verbal confirmation from European leaders that they are out of the crisis. In addition, China better than expected GDP numbers lend a hand to the current optimistic equities market. However, is this optimism a sustainable one?
Expect a volatile trading week as we host several key data such as ADP non-farm change, FOMC statement and US unemployment rate.

Short Term: Gold opened this morning with a positive note after founding support and retested $ 1665.00. Prices remained unchanged for most part of the Asian trading hours but as London opens, prices start to break lower and tested support at $ 1652.10. Our last commentary mentioned that support is close to 61.8% retracement line that we plotted at $ 1653.00. The lack of physical buying is one of the reasons but traders are also being cautious and most stayed on the side lines - awaiting the FOMC statement. We are on the side lines for now and look to buy in the dip should gold price break below $ 1650.00.

Medium Term: We see a potential Head and Shoulder pattern emerging on the US dollars. If the neckline is broken, the dollar could weaken further and this could benefit gold. The US debt ceiling has been raised for a limited amount of time (through to 18th May) and sooner or later more negotiations may lead to market uncertainty. Ratings agencies such as Fitch has already warned that should the automatic tax cut is activated, the US economy could face recession. In addition, we are in a possible midst of a currency war that could further devalue paper money. Smart investors will have to build a decent portfolio to hedge against inflation and potential currency debasement. 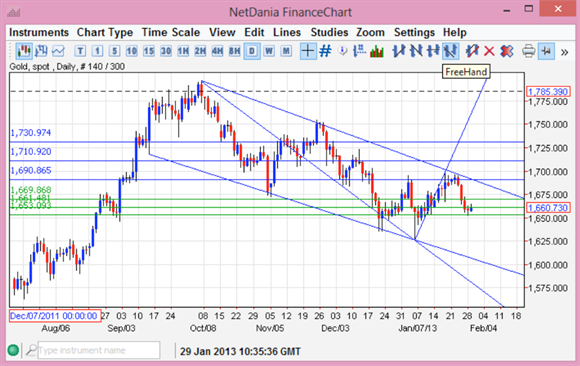 Short Term: Silver failed to hold on several key supports and could potentially target a triangle bottom. After finding support at $ 30.74, silver prices reclaimed the $ 31.00 area this morning and tested $ 31.19 before selling pressure pushed it down to consolidate further. It failed to hold on to the downtrend line at $ 31.50 then the 38.2% retracement line at $ 31.23 which suggest further weakness in the short run. Silver dipped lower after a much better US durable goods data and found support at $ 30.74. Given that silver is acting like a safe haven rather than acting positively to better economic data from the US, we would suggest caution.

Medium Term: There are potentially 2 scenarios that is plausible - depending on the economy, US dollar as well as gold prices. Silver prices could find support at the 61.8% retracement line at $ 30.47 and found some buying interest. It could potentially lead to a bullish rally to test the downtrend line at $ 33.00 on the daily chart.
The other scenario we envisaged is where silver prices failed to hold on to $ $ 30.47 and break lower to test January low of $ 29.25. Should prices reacted bearishly, it may not bode well in the interest of long term investors who seek an alternative to gold investment. 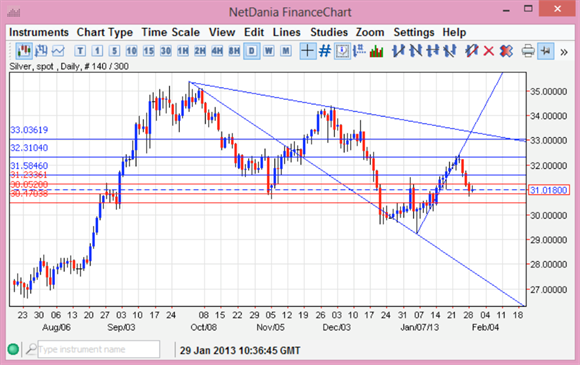