SHARPS PIXLEY Is Gold having a personality problem? Funds prefer Equities to Bullion

Lagarde – no time to relapse so no time to relax even if we avoided the collapse in 2012. She added, Euro policy implemented in 2012 has shown positive signs and encouraged politicians to keep the momentum and avoid complacency.

German Ifo Business Climate climbed to 104.2 from 103.1 as forecasted which has sent the Euro surging. It suggests that Germany is the heart of growth in the Eurozone and it looks set to continue at the moment. The German Dax rose higher to 7818 as market participants are more optimistic on the business outlook. Elsewhere, the other Eurozone partner is not enjoying such good numbers especially Spain and France. In addition, the strong Euro may not benefit trade competitiveness in the long run. The road to recovery is a rather long and one sided event in the Eurozone.

To make matters worse, the UK economy contracted and could enter a Triple dip recession. The economy is essentially flat and analysts predicted that GDP will not return to the level seen in the first quarter of 2008 until the first half of 2015. The question now is will George Osborne, the Chancellor ease off the tight austerity plan?
On-going issues on currency war escalated as South Korea raised concern of the strong Won while facing stiff competition in the same industry against the much weaker Japanese Yen. Japan’s Finance Minister Taro Aso rejected the claim that they are manipulating the JPY to orchestrate a weaker Yen purely for its own economy.

Short Term: Last Friday, gold prices opened lower and tested $ 1663 which is the 200 DMA before some buying interest pushed it back above the $ 1670s level. At the moment, gold is still consolidating after its last failed attempt on $ 1700. We may consider shorting the market should it close below the 61.8% retracement at $ 1653 area.

Medium Term: The current support level on gold is at $ 1661 and $ 1653 respectively. Gold has not reacted positively on bullish bullion news and does not seem to correlate well with currencies or oil. We are concerned with the multiple personality that gold has evolved as investors draw a blank conclusion. Chatters among Asian gold dealers are to wait for lower prices before entering the market (some prefer $ 1650) and the lack of upside momentum could possibly be the after math of a lower demand from India after the increase in tax import duty. 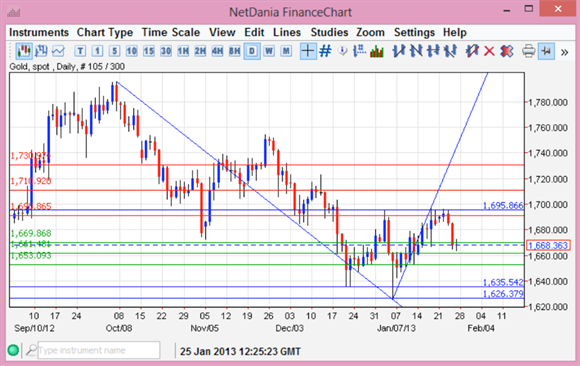 Short Term: Silver prices continue to consolidate. Initially, it found support at $ 31.50 areas before an increase in selling pressure which take it down to the 38.2% retracement area at $ 31.23. Silver ETFs also suffered a fall as investors look to lock in their profit after a good run from its previous low at $ 29.27 area.

Medium Term: We maintained our view that silver has got the potential to find support and retest to take on its previous high. It may just need a little time to catch its breath. Should the price found support above 31.00, we would suggest a buy for silver to retest its January high and to complete its sideways range target at $ 33.04 (see chart)