In Europe, the latest Sentix poll stated just 17.2% of investors believed one or more states could leave the G17 over the coming year. This is a significant drop as market confidence grows with regards to the Euro zone. However, Greece remains the most likely candidate even though the chances of leaving have dropped to 13.9% from 22.5% in December. Elsewhere, there are more negative data out of Spain with its December adjusted retail sales down at -10.7% year on year compared to previous -7.8%. Despite that, Euro remained unchanged albeit slightly weaker at 1.3431.

Japan Business Federation claimed that some firms are to raise wages next year in line with the current economic policies. Asian trading session highlight a weaker JPY as Japan Finance Minister Taro Aso hopes the recent weakness in the currency could boost business sentiment. In a rare occasion, Vietnam made into the highlight as local analyst predicted a possible correction in Vietnamese gold dong and suggest investors to get out before it is too late. The analyst claimed that local banks have been rushing to buy back the gold that they initially sold and possibly at a loss.

Bloomberg analysts surveyed that the Fed will continue with its 85 bln monetary easing programme until unemployment is brought under control at or below 6.5%. Traders are waiting for more confirmation as to how long this easing programme will last and if the Fed statement will decide on a possible deadline. “The concern of the over aggressive easing policy could increase the risks of future financial imbalances” claimed Kansas City’s Esther George who is among the regional bank presidents.

Despite the last hawkish comments from the previous Fed statement, analysts felt that most of the bearish sentiment has been priced in on the precious metal prices. The Fed just embarked on its 85 bln monetary easing programme and unlikely to abandon the programme so early plus the likelihood of reaching 6.5% employment is still farfetched. We expect a volatile trading today and will not be surprised if market remains muted after the FOMC statement as it will take time to digest Mr. Bernanke next plan and watch for the next US employment data.

Short Term: This morning, gold prices put on a positive upside as prices managed to find support from yesterday’s low of $ 1652.00. Gold prices tested $ 1669.15 and holding in that range as physical demand picks up slowly from China. The daily chart show a potential reversal morning Doji star that could spell trouble for the bears if gold price is able to retain its gain and moved above $ 1668.00 (uptrend line). Meanwhile, gold exchange traded product fell for the 3rd consecutive days with the lack of demand and depressing gold price as investors look elsewhere to park their cash.

Medium Term: We are neutral bearish on gold as it consolidates between $ 1625 and $ 1697 area. Resistances are at $ 1696 and $ 1697 respectively while support remains at $ 1635 and January low of $ 1625.00. On our last commentary, we expressed caution to take any significant position in the current market as it waits for the FOMC statement today. On a positive note, should gold hold off the selling pressure and claimed above $ 1697 then we could be more bullish. However, the question now is what could spark a recovery rally on gold price? 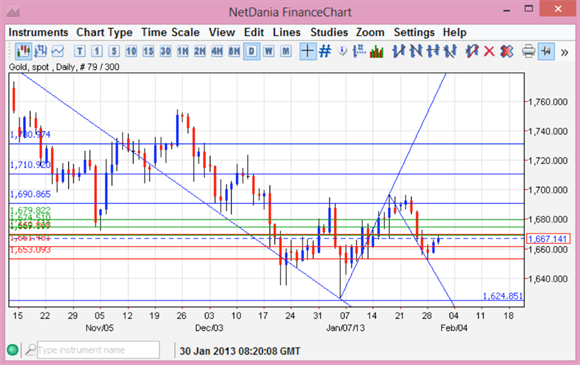 Short Term: Yesterday, we have a volatile trading on silver as it breaks below $ 31.30 and tested $30.80. This morning, prices moved higher on the back of the weaker US dollars. We expect silver prices to react positively on the back of a more positive economic data but we and the market were wrong. General sentiment remains bearish as silver is trading like a safe haven assets. At the moment, the 200 day moving average which is at $ 30.60 is acting as the next support. If that fails, we recommend shorting the market and initially target support at $ 30.47 which is the next 61.8% retracement line.

Medium Term: In view of the current silver price reactions, we envisaged a lower silver price as per our last commentary. If prices failed to hold on to $ $ 30.47 then a possible selling spree could take it back to the January low of $ 29.25. The above view is made despite positive media coverage that the US mint has halted the sales of silver coins as well as a significant increase in silver exchange traded product holdings. 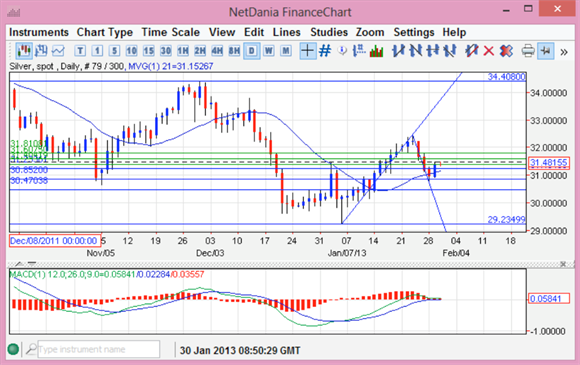