The UK remains one of the world’s biggest conduits for gold trade and the latest gold import and export data for August serve to confirm this, although gold exports again hugely exceeded imports that month – as indeed they have for the past three years – which makes one wonder where all this exported gold is being sourced from internal inventories given it has virtually zero production of its own to call upon.  The chart below from Nick Laird’s www.sharleynx.com website shows the UK net gold import/export statistics over the past several years: 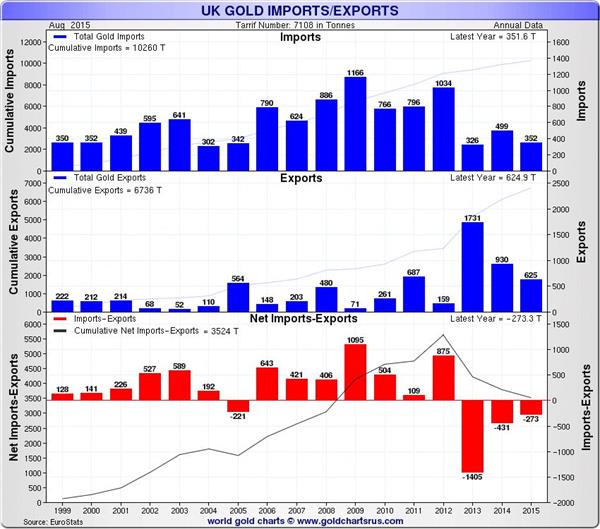 In August, the UK imported 24.5 tonnes of gold, the major part coming from Canada and the US which between them exported 17.8 tonnes to the UK.  But gold exports were at a considerably higher level at 134 tonnes with the most significant part of this (81.7 tonnes) going to Switzerland where it is re-refined mostly into smaller bars and re-exported primarily to China, Hong Kong, India and the Middle East.

But it is the lesser recipients of UK gold exports which throw up some really interesting statistical data.  The two other biggest export destinations were China and Hong Kong, followed by the United Aran Emirates – and it is the proportions going on to the first two of these countries which might be considered hugely significant, even though all of this is ultimately destined for the Chinese mainland.

Hong Kong gold exports to China has long been considered the major routing for gold flows into China – so much so that for many years the Hong Kong figures were considered by most analysts as a proxy for total Chinese gold imports.  But the Chinese government moved the goalposts last year allowing more direct imports and this has been something of a game changer and in general we believe that 30-40% of gold coming into the Chinese mainland from the traditional major sources has been bypassing Hong Kong altogether.  There are almost certainly other sources of gold supply into China where the exporting countries don’t publish statistics which are also going direct to the mainland, which makes overall total Chinese gold imports almost impossible to assess – but the Hong Kong figures can nowadays most certainly not be considered much of a true guide to total Chinese gold imports. 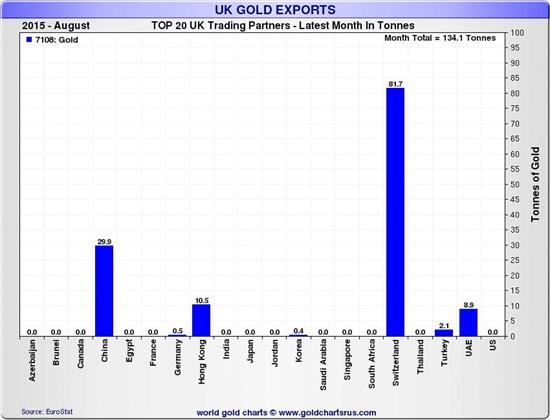 And the latest UK gold export statistics for August demonstrate this in the extreme – see another chart from the www.sharelynx.com website above.  Out of the total exported to Hong Kong and mainland China (40.4 tonnes) 29.9 tonnes (74%) went directly to the Chinese mainland thus bypassing Hong Kong altogether.  This is the highest percentage we have seen to date from a major gold exporting nation.  It may be an anomalous figure given month by month fluctuations – but it does further demonstrate that analysts and the media can no longer rely on Hong Kong net gold exports to China as being anything but just an important conduit – one of many – in the overall context of Chinese gold imports.