LAWRIE WILLIAMS: China back as No. 1 importer of Swiss gold but at low level.

The Swiss Customs Administration has now released its gold import and export figures for April, and after a hiatus China is back as the leading importing nation, but at much lower level than it has tended to be in the past.  That other usual contender for the No. 1 Swiss gold import position, India's imports only came in at around half those for China in the April figures, so it is fair to say that gold bullion flows via Switzerland from West to East are still hugely curtailed.  A country-by-country bar chart showing the principal recipients of the Swiss re-refined and exported gold bullion is set out below: 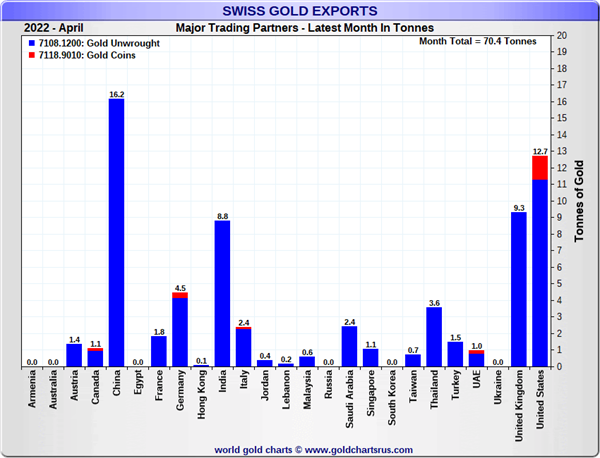 Indeed total gold flows in and out of Switzerland in April were much lower than average.  Total gold imports only amounted to 83 tonnes and exports to 70.4 tonnes.  In a normal month the totals in both directions probably average over 100 tonnes and, for example in March imports came to 181 tonnes and exports to 147 tonnes.  For April just over 50% of the Swiss gold flowed to the Middle East and Asia.  In some other months these directional flows have totalled 80% or more.

There were some major anomalies in the import sources for the Swiss gold confirming considerable turmoil in the global gold markets.  The largest volume came from the United Arab Emirates, certainly not known as a gold producer, but very much at the centre of the Middle Eastern gold trade.  It provided around a quarter of the gold flowing into the Swiss refineries at 20.6 tonnes during April which suggests a huge running down of built-up gold inventories and perhaps a degree of profit-taking around the peak in the gold price occurring in early April when the gold price topped out at over $1,980.  If so that represented some pretty smart trading timing!

Hog Kong too provided an above average volume of gold to the Swiss refineries, presumably for similar reasons to the UAE supplies, although only 4.4 tonnes, but still a high volume for a nation which has no domestic gold production.

As usual, though, most of the balance of the Swiss refinery gold supplies came directly from mines in countries with no domestic gold refining capacity in the form of impure doré bullion, as well as gold scrap primarily from wealthier countries.  Interestingly all 2.1 tonnes of gold from France appears to have been in the form of gold coins for remelting.  The Swiss refineries tend to specialize in re-refining gold into the usually higher tenor product and smaller sized bars and wafers most in demand on international markets, particularly in the Far East.  They process an amount equivalent to up to around half of the world’s new mined gold some months so provide an excellent window on the directions and volumes of global gold flows.