LAWRIE WILLIAMS: China back on top for Swiss gold exports

After several months of low imports of Swiss gold with India very much the major recipient of the re-refined high ultra high purity product from that country’s gold refineries in July.   China moved back comfortably as the major recipient of the Swiss product, taking no less than 80.8 tonnes – or fully 42.9% of the amount exported that month.  Almost 45% if one includes Hong Kong in the Chinese figure.  Turkey and Thailand’s gold imports from Switzerland in the month also exceeded those headed to India with 20.1 and 17.8 tonnes respectively, high numbers for both countries, while India absorbed 16.2 tonnes in fourth place- still a respectable import total.  All in all, Switzerland exported 188.3 tonnes of gold that month, comfortably in excess of imports of 110.4 tonnes, and more than counterbalancing export deficits for the previous 3 months. 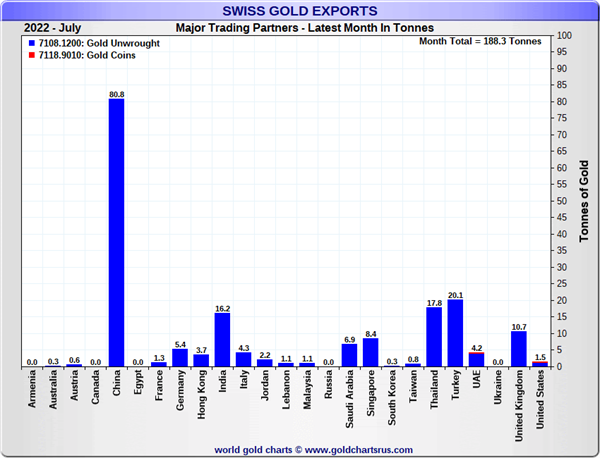 So why are gold exports from this small European nation with no gold production of its own so significant as to warrant this kind of comment.  For historic reasons, the Swiss gold refineries, as readers of my columns will be aware, have always handled an important proportion of global gold and have been a key element in its global flow.  They specialise in taking doré bullion from mines, gold scrap and very slightly lower tenor good delivery gold bars and re-refining all this to the wafer and kilobar sizes, gold coins and ultra high purities most in demand in the global marketplace, particularly to stronger hands in the Asian markets to which much of this re-refined gold is destined.  Sometimes the volumes match, or even exceed, as in July, an equivalent of over half the global tonnage of new mined gold so it is an extremely valuable window on world gold flows, and one we have always followed closely.  For July, for example, some 87% was destined for Asia and the Middle East assuming one includes Turkey in the latter.

The apparent resurrection of Chinese demand ties in well with other data we have been picking up too, notably the improving month-by-month gold withdrawal figures from the Shanghai Gold Exchange (See:  Chinese gold demand picking up nicely despite lockdowns).  China is the world’s largest gold consumer and the state of Chinese consumption has to be vital to overall world gold demand figures.  While we doubt this will return this year back to its previous peak levels at least it seems to be on the right track.