The Swiss Customs Administration has released its figures for gold imports and exports for August and China has retained its position as the top importer, taking in 37.9 tonnes.  This was followed by Turkey, which had only been a minor recipient for the previous few months, with 25.3 tonnes, and then India, where imports seem to be recovering again with 19.4 tonnes.  If we include Turkey as being in the Middle East, this area and Asia accounted for fully 86.3% of the exported Swiss gold (see chart below).

That Chinese gold demand seems to be running strong again has been evident from our reports on withdrawal figures from the Shanghai Gold Exchange (see: China gold consumption still climbing y-o-y) and an even more recent Bloomberg report that gold benchmark prices in Shanghai have climbed to a premium of more than $43 an ounce over their London equivalent, the highest since 2019, according to data from the World Gold Council. London and Shanghai prices appear to have steadily diverged over the course of the month, with the Chinese market remaining relatively firm despite downwards pressure on international prices.  Bloomberg comments that the difference shows how demand in China is outstripping supply, which has been constrained by government policy. Only accredited banks in the country are allowed to import gold, with quantities set by the Chinese central bank.

Bloomberg goes on to note that banks will likely receive new gold import quotas after the Golden Week holiday at the beginning of October, according to a person familiar with the matter. Local importers have recently been struggling to get shipments approved by Chinese lenders, sign they may have used up their existing quotas. 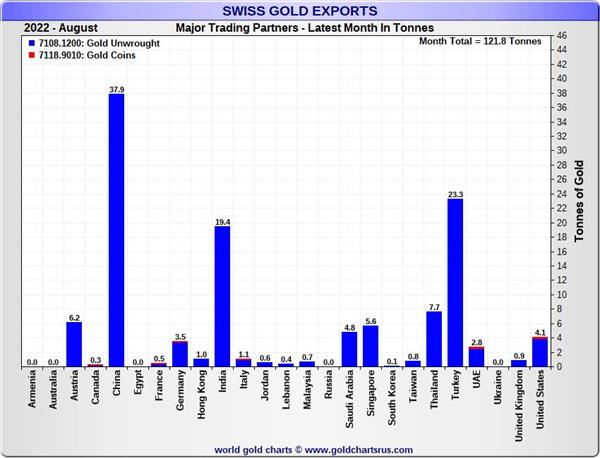 Largely for historic reasons, the Swiss refineries represent an excellent indicator of the direction of gold flow traffic worldwide.  They process doré bullion from mines, gold scrap and larger gold bars and refine and re-refine this material mostly into the smaller bar sizes, coins, medallions and wafers most in demand on international markets.  Overall an amount of gold equivalent to around half the world’s new mined gold is treated by the Swiss refineries on an annual basis.  It used to be a higher percentage, but a number of gold producing and trading countries now operate their own refineries, although some of these are managed and/or operated by the Swiss as the experts in this field.

Of the Swiss gold imports in August these were dominated by gold from the USA which exported 49.5 tonnes of the 170.5 tonne total received, but most came in from other gold producing nations in the form of doré bullion from the mines.  As has been the case in recent months important amounts were also received from typical gold trading sources like the UAE (8.6 tonnes) and Hong Kong (6.2 tonnes) although the volumes from these seem to be diminishing suggesting that trade is relatively strong.

Interestingly the Swiss recorded the receipt of 5.8 tonnes of Russian gold.  This is believed to have come from gold which was already in London as gold coming directly from Russia would have been blocked from import into Switzerland by sanctions.