LAWRIE WILLIAMS: China/Hong Kong back as top importers of Swiss gold in October

After several months of India, the world’s second largest consumer, being the top recipient of gold bullion exports from Swiss gold refineries, China resumed its position of being the No.1 receiver of such.  If one adds in gold exports to Hong Kong, greater China imported some 75.7 tonnes of refined Swiss gold in October, around 52.7% of that small European country’s gold exports that month.  China and Hong Kong combined were followed by India which took in 41 tonnes of Swiss gold.

The Swiss refineries in October sold gold equivalent to around half the total global volume of newly-mined gold that month.  Indeed if one takes non-Chinese new mined gold, the Swiss refineries exported gold equivalent to around 55% of the global total.  90% of the Swiss gold exports was destined for Asia and the Middle East.  Altogether Switzerland exported 143.7 tonnes of gold that month (see graphic below for the country-by country totals.) 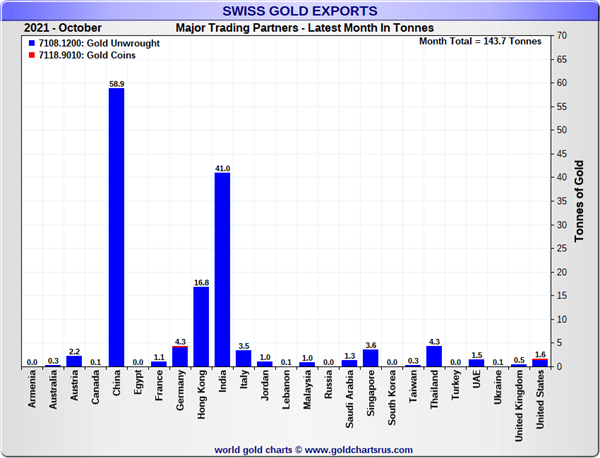 Swiss gold imports in October totalled 171.2 tonnes of which the UK was the biggest supplier at 87.4 tonnes.  The UK remains the global centre of gold trade and much of the nation’s gold exports to Switzerland will have been in LBMA good delivery gold bars which will have been re-refined into the marginally higher purity, and smaller sizes, most in demand by gold investors globally.  Most of the balance came from semi-refined doré bullion from gold mines around the globe plus some excess inventory from Middle Eastern and Hong Kong gold traders and fabricators, as well as some scrap gold mostly from European nations like Germany, France and Italy.

The Swiss gold refiners have, over many years, carved out a niche in re-refining gold scrap, doré bullion and large gold bars and re-exporting their product to consuming nations globally.  The volume of gold so processed and exported is sufficient to provide an excellent window on global gold export and consumption patterns and is a great pointer to the substantial flows of gold from perhaps less firm holders of gold in the West to firmer hands in the East. There gold has had a particular place in wealth preservation among those who have, over the years, suffered from the debilitation in purchasing value of their domestic currencies.

The resumption of China as the prime recipient of Swiss gold during the past month was borne out by our recent article on Chinese gold consumption (see China gold demand highest for 3 years).  While China as the world’s No.1 gold consumer has not yet recovered sufficiently from the Covid pandemic to get back to its gold consumption peaks of some six years ago, it is slowly, but surely, moving back towards these gold demand levels.  It is still the world’s top gold miner in terms of production volumes, although is being caught up by Russia and Australia with production slipping at home while that of its rivals is growing.

With Indian gold consumption also recovering this year – again as has been seen in Swiss gold export figures over the past several months - gold’s strong demand potential looks to be remaining intact. With the recent higher metal price, the recent slippage in gold ETF inflows may again be reversing while there has been some positive news on likely central bank gold purchases in the months ahead.  Gold’s fundamentals may thus be beginning to pick up nicely.