For some years now, Asian nations, led by China, Hong Kong and India, have been the primary recipients of Switzerland’s exports of re-refined gold.  Refineries in this small, but hugely significant European nation in the gold context, specialise in taking London good delivery gold bars, gold scarp and doré bullion from mines around the world, and converting it to the kilobar and smaller sizes most in demand in Asian gold markets.  However in recent months the pattern has changed drastically. 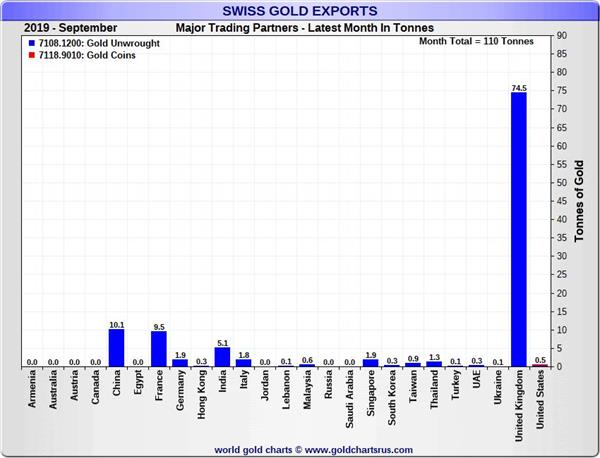 As can be seen from the above graphic from Nick Laird’s www.goldchartsrus.com service, the latest figures covering Switzerland’s September gold export figures, those to Asia have diminished hugely in favour of the U.K. being by far the largest recipient.  These are not one-off figures.  This is the same pattern which has emerged from the preceding several months’ Swiss gold export data and is generally put down to a combination in a fall-off in demand from China and India in particular, coupled with massive inflows into gold ETFs, most of which keep their gold vaulted in London.

According to the World Gold Council (WGC) gold ETFs globally are at an all-time high in terms of volume, although not in U.S. dollar valuations, in part due to a strong rise in European and Asian ETF gold holdings.  Gold ETF volumes used to be dominated by the big U.S. ETFs (GLD and IAU) in particular, but those in the rest of the world have been playing catch-up.  The U.S. ETFs still dominate though, but their percentage of total holdings has been diminishing and they now hold only just over half of global gold ETF assets under management as opposed to around two-thirds back in 2012 when the previous high tonnage was held in the gold ETFs.  At the end of September total gold ETF holdings came to around 2,855 tonnes.  They will have risen a little further in the current month,

It is particularly noticeable that flows into Asian gold ETFs have been rising quite sharply.  This particularly so in China where there had initially been strong resistance to gold ETF investment.  But recent increases suggest that many Chinese are beginning to put their trust in gold ETFs rather than the accumulation of bullion.

The pattern of Swiss gold inflows is also particularly interesting.  While the pattern of flows from gold producing nations remains little changed, there have been big inflows from nations/areas which traditionally have been big net importers of Swiss gold.  As can be seen from the chart below(also from www.goldchartsrus.com), by far the biggest source of Swiss gold imports in September was the United Arab Emirates – normally an area of gold trading and supply to other Asian nations. 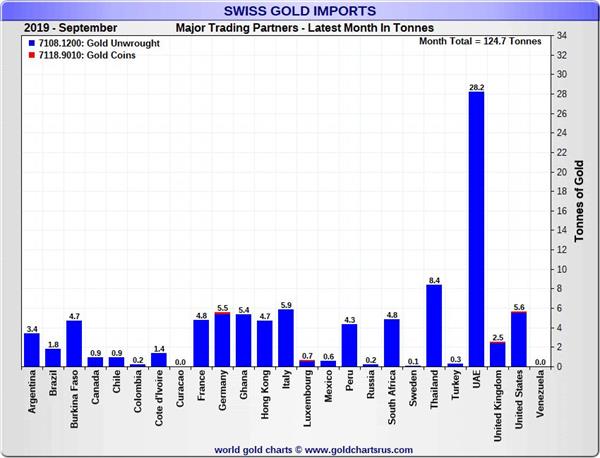 Notably a number of other nations which would perhaps normally be importers of Swiss gold, like Thailand, Hong Kong, Italy, France and Germany were among the bigger exporters of gold back to Switzerland.  In some instances this may well just be profit taking given the higher gold price level, but in the case of the UAE in particular this may well represent a fall-off in demand with traders and fabricators offloading excess stocks – at a profit of course which may well have helped stimulate the action.

The WGC does point out in its ETF analysis that there are several potential positive catalysts for gold looking forward from September to the current month, some of which have already come about and others, perhaps, ongoing.   Global uncertainty continues around the world.  Tensions remain high in the Middle East, while North Korea seems to have returned to making seemingly belligerent statements and moves.

In the U.S. and Europe there is a degree of uncertainty too.  The U.S. House has initiated a preliminary enquiry into the possible impeachment of President Trump.  The WGC comments that if this goes ahead, even though unlikely to gain the support of the Republican-dominated Senate, this could be a catalyst negatively impacting more risky equities and also influence Chinese negotiators to potentially delay any serious trade solutions until the 2020 Presidential election is out of the way, possibly ushering in a new, less-hostile, Administration..

In Europe, the supposed deadline for a Brexit decision is almost with us, and although there appears to be the probability of yet a further extension, uncertainty about any eventual outcome remains.  Prime Minister Johnson is pushing for a general election, which current polls suggest he would win, but he requires a two-thirds majority in Parliament to force this through and the main opposition Labour Party is, not surprisingly, opposed. The numbers for such an election being called probably don’t add up.

Interest rates worldwide remain low; the WGC estimates that over 80% of sovereign debt is trading with negative real rates, thus lowering the opportunity cost of investing in gold.  Meanwhile, the US stock market is trading near all-time highs and, while so far October has not seen any significant falls, as it often seems to have done historically, there remains a degree of nervousness with many pundits predicting a massive correction ahead. The rise in ETF holdings and central bank buying at high levels do seem to be counterbalancing the apparent fall-off in Asian demand too.

All the above points are gold positive.

However on the flip side, the WGC notes, continued dollar strength and a deceleration in gold consumer demand in India and China could create headwinds for the yellow metal despite the high ETF and central bank demand – this downturn in key Asian demand being highlighted by the latest Swiss gold export figures.   Consultancy Metals Focus, while remaining cautiously optimistic on the gold price going forward, suggests supply will have risen this year with new mined output slightly up but, perhaps more significantly, higher gold prices leading to a surge in scrap supply.  Swings and roundabouts!

All in all, however, we feel the positives outweigh the negatives for gold – and for the other precious metals too, despite the seeming huge drop in demand from the world’s major gold consuming nations.  We too, like Metals Focus, remain cautiously optimistic on the gold price moving forwards, but we still don’t subscribe to the view that it will climb rapidly to $10,000 or above.  If it should do so then that would imply a huge-scale global economic or geopolitical disaster which would precipitate chaos worldwide.  We suspect that, as almost always, the politicians will muddle through and save us, probably unwittingly, from the breakdown in society that a massive gold price increase would envisage.  Maybe we are being too complacent, but the alternative is almost too horrific to contemplate.