We always monitor the monthly Swiss customs data for gold imports and exports as they provide an excellent window on the directional global flows of gold bullion given the huge importance of the Swiss gold refineries in this traffic.  For the month of September, these have just been released and show that in that month this small European nation, with no domestic gold production of its own, imported some 181 tonnes of gold of refined, semi-refined and scrap gold and exported 176.3 tonnes of ultra-refined gold bullion during the period.

As usual the gold flows were predominantly from gold producing nations and gold holding ones in the West to consuming and hoarding ones in the Middle East and Asia, which recipients are assumed to be stronger holders.  Indeed in September 89.6% of Swiss gold exports were destined for these more easterly areas assuming one counts Turkey as a Middle Eastern nation.

A recent report on Bloomberg has highlighted this geographical transference of gold which has led to demand exceeding supply in some areas and price premiums appearing in some markets.  Bloomberg comments that rising rates that may be currently making gold less attractive as an investment in the West mean that large volumes of metal are being drawn out of vaults in financial centres like New York and London and heading east to meet demand in Shanghai’s gold market or Istanbul’s Grand Bazaar and as a result, gold and silver are selling at unusually large premiums over the global benchmark price in some Asian markets in particular.

Bloomberg further reports that more than 500 tonnes of gold has poured out of New York and London vaults since the end of April, according to data from the CME Group and London Bullion Market Association.  At the same time, shipments are rising into big Asian gold consumers like China, whose imports hit a four-year high in August. 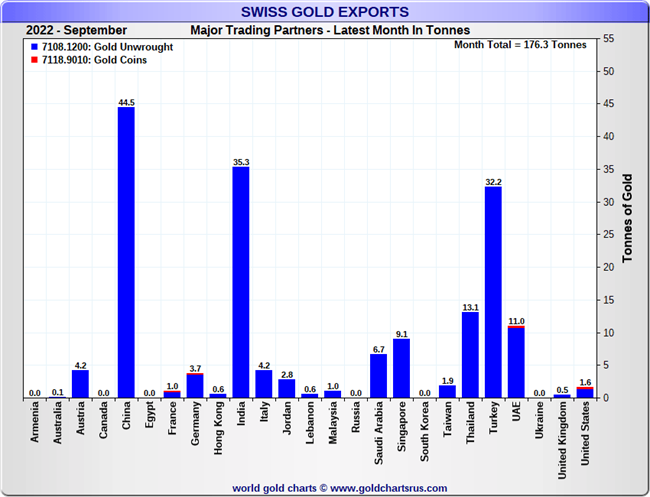 China/Hong Kong continued to occupy top spot for the Swiss gold exports in receiving 45.1 tonnes, with by far the major part (44.5 tonnes) going directly to the Chinese mainland, thus diminishing the importance of Hong Kong even further as a conduit for China’s gold imports.  India, which took in 35.3 tonnes looked to be resuming its appetite for gold consumption, closely followed by Turkey which imported 32.2 tonnes.  Other significant Middle Eastern and Asian nation recipients of the Swiss gold were Thailand (13.1 tonnes), the United Arab Emirates (11 tonnes), Singapore (9.1 tonnes) and Saudi Arabia (6.7 tonnes).

Swiss gold imports during September were mostly from gold mining nations where it tends to receive doré bullion direct from the mines for re-refining into the ultra high purity kilobars, wafers and coins most in demand on global markets.  The refineries also receive larger bars from the major gold vaults in countries like the U.S. and the UK which hold high purity good delivery large gold bars, often on behalf of third party nations, which may need to dispose, or lease them in smaller sizes on global markets and they are geared up to accomplish this too.  Historically the Swiss refineries have carved out a substantial business and reputation in this arena, and handle an amount equivalent to perhaps up to 60% of new mined gold annually so comprise an extremely significant part of the global gold market in terms of directional flow patterns.